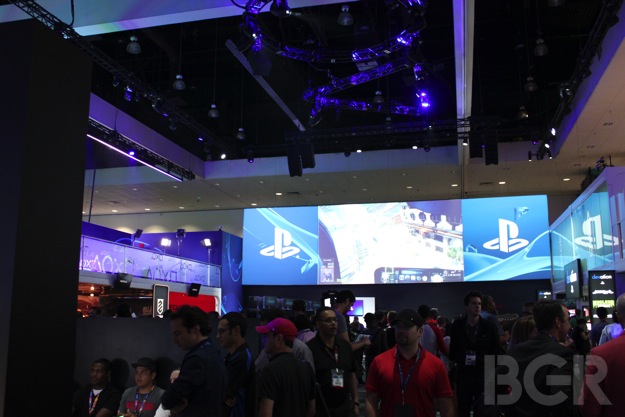 The first day of E3, as you can read in my Day One Report, was relatively tame. In between my meetings with Microsoft, I had plenty of time to explore the show floor, take some pictures for the inevitable E3 gallery and eat lunch at a reasonable hour. On the second day, that was not the case.

I started E3 Day Two at Sony’s booth, with a wealth of new games to choose from. After walking in circles trying to decide what to pick up first, I settled with Driveclub, the exclusive driving game that was originally meant to launch alongside the PS4. One of the game’s developers explained to me that although they had a “good” game ready last November, they wanted to make a “great” game, so they decided to delay Driveclub’s release date.

Of the three racing games I’ve tried so far at E3, Driveclub felt the tightest. It wasn’t quite as much of an arcade experience as Burnout or Need for Speed, but it was fairly forgiving as I got a grasp of the drifting and drafting.

After Driveclub, I moved on to try the new Killzone: Shadow Fall co-op mode, which is basically Guerrilla Games’ take on horde mode. I also saw Entwined, which was released on the PlayStation Store during Sony’s press conference; LittleBigPlanet 3, one of the show’s biggest surprises; The Order: 1886, which you can read about in my hands-on/hands-off preview and a few others which I’ll talk about in the future.

For my last appointment with Sony, I finally got to try the elusive Project Morpheus, Sony’s answer to the Oculus Rift. The first demo I tried, the castle demo, put me in the shoes of an armored knight, equipped with various weapons to dismember a dummy that had been placed in front of me.

Using two PlayStation Move controllers and the PlayStation Camera, the game was able to track my movements, specifically my arms. By pressing the triggers on the Move controllers, I could clench my fist for a powerful punch, with which I promptly knocked the dummy’s head off. As the demo progressed, I was given a sword, a flail and a crossbow, each of which worked flawlessly with Morpheus. I could even close one eye to aim down the sights of the crossbow, shooting accurately enough to lop off one of the dummy’s hands without removing the entire arm.

The second demo, The Deep, set me loose in a shark-proof dive cage, lowered slowly into the ocean only to find, you guessed it, an unhappy shark waiting for me. The 3D audio made the chatter from my diving companions sound all too real as they tried to calm me down while the shark began circling my cage. I shot a flare to scare the shark away, but as the voices in my head explained, that was only going to irritate it further. That’s when it struck.

It was more of a passive experience than the castle demo, but had I been in a less chaotic setting, I could see myself genuinely jumping out of the Morpheus to escape the shark as it ripped apart the cage. Turning a full 360-degrees around to watch the shark circle the cage is about as fully immersive of a VR demo as I’ve seen so far. I’m not willing to confirm whether or not I was holding my breath during the demo, but you’re welcome to your assumptions.

The final demo was by far my favorite: Street Luge. I sat down on a bean bag chair, laid back and donned the Morpheus, greeted by a calm highway. I was sitting at the top of the highway on a skateboard, and after the instructions were explained to me (tilting my head changed the directed of the skateboard), I was let loose. My speed picked up quickly — before I knew it I was flying down the road at over 100 mph, squeezing between sedans and 18-wheelers to maintain my momentum. After a few terrifying close calls (and one or two collisions), I made it to the end of the course with a time of 2:08, which I’m told is pretty impressive for a first-timer.

There’s plenty more I saw at the Sony booth that I can’t wait to delve into, but I’ll save some of those previews for the future. Remember to keep it locked on BGR for continuing E3 2014 coverage as we head into the final day.