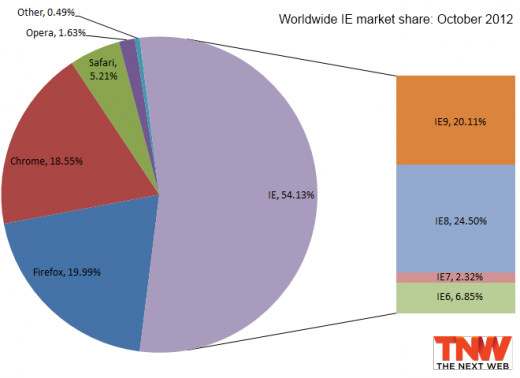 The past two months have been difficult for Google’s (GOOG) Chrome Web browser, as TheNextWeb reports that Chrome lost market share for the second month in a row in October as Microsoft’s (MSFT) Internet Explorer 9 browser continued to grow. The latest numbers from Net Applications indicate that Google’s browser market share fell by 0.31% from September, while Internet Explorer gained half a percentage point, and both Firefox and Safari declined slightly by 0.09% and 0.05%, respectively. Internet Explorer 8 remains the most popular browser with a 24.5% market share and when combined with IE9’s 20.1% share along with previous versions, Microsoft controls a dominating 54.1% of the market. Firefox’s overall 19.9% market share is good enough for second place, followed by Chrome and Safari at 18.5% and 5.2%. Microsoft’s lead is expected to continue with the addition of Internet Explorer 10, which comes preloaded with Windows 8.