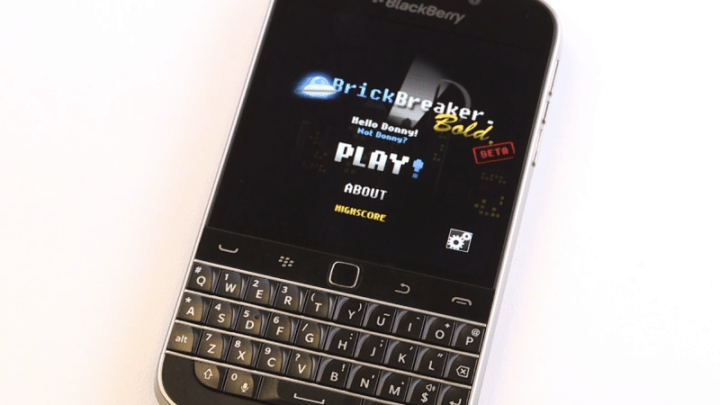 BlackBerry is through trying to mimic Apple and Google, which is why it’s decided to kick things old school this year and release devices that emphasize its iconic physical QWERTY keyboards. And now the company has just unveiled its biggest throwback device yet that not only features a physical keyboard but also brings back function keys, trackpads and other old-timey BlackBerry staples. Yes, we’re talking about the BlackBerry Classic.

During the announcement, CEO John Chen said that he talked with several BlackBerry customers on Wall Street early in his tenure and they told him that BlackBerry should never have removed the keyboard and track pads on its devices. The Classic isn’t just a throwback device, however, as Chen also emphasized that BlackBerry has tried to vastly improve battery life on its newest devices and BlackBerry says the Classic’s battery will last 56% longer than the 2011 Bold 9900.

BlackBerry COO Marty Beard brought Citco CIO Joe Maxwell onstage to talk about how important BlackBerry-level security is to the financial services industry. He also said that physical keyboards were essential to his BlackBerry experience because he had “big fat fingers.”

BlackBerry during its presentation also showed off how the Classic’s track pad could be used to play Brick Breaker, the classic game that’s sure to bring back nostalgia tears from many BlackBerry users. BlackBerry also pushed the accuracy of its physical QWERTY keyboard, which it says reduces errors four-fold compared to its virtual touch keyboards.

In addition, BlackBerry touted improvements to browsing on the Classic, which it said was much faster and more capable of the old BlackBerry browser found on its 2011 Bold models.

BlackBerry has also posted a video showing off the Classic’s key features. Check it out below.