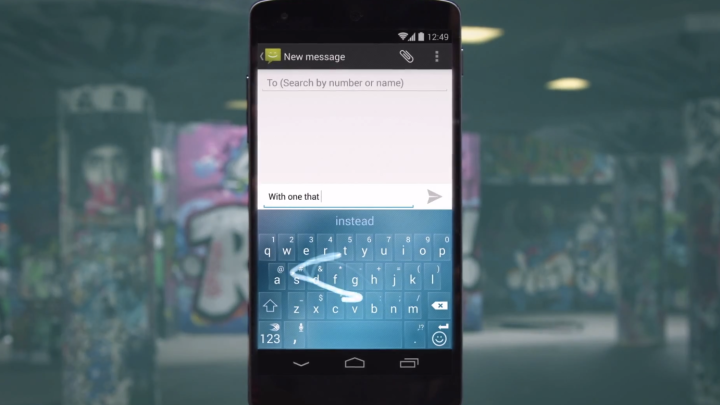 One of the best Android keyboard replacements out there is now free. SwiftKey announced on Wednesday that it’s dumping its traditional $3.99 price tag and is moving toward a “freemium” model that will offer in-app purchases that include up to 30 new individual themes and other customizable content that it will add to its in-house store in the coming weeks.

In addition to launching its new SwiftKey Store, the latest update to SwiftKey also adds some very cool new features including an optional number row you can add so that you don’t have to switch settings to type in numbers, an improved prediction engine and a new default theme that “was designed to be a modernization and ergonomic improvement to SwiftKey’s ever-popular Cobalt theme.”

For those of you who have never used it, SwiftKey offers a hugely improved typing experience from the default keyboard you get on Android phones since it lets you slide around your finger over the keys instead of forcing your to peck at them one by one. Although there are plenty of these kinds of apps for Android, SwiftKey has won plaudits for both its typing accuracy and its ability to predict which words you’re going to want to use next.

And for any iOS users who are jealous that only Android users get to replace their phones’ default keyboards, don’t worry — now that iOS 8 is opening the doors to replacement keyboard apps, SwiftKey has said that an iOS version of its software is coming soon.

SwiftKey Keyboard replaces a mobile device’s keyboard with one that understands language and learns your personal writing style. These insights improve typing with more accurate autocorrect, prediction of your next word and other innovations like SwiftKey Flow, which lets you type faster by sliding your finger across the screen. The app launched in 2010 to critical acclaim, and is one of the world’s best-selling Android applications, spending more days at number one on Google Play than any other paid app.

Today’s transition to free gives all Google Play users access to that award-winning software at zero cost. This means that all of the market-leading features that have defined SwiftKey’s success as a paid app are now completely free. The move accelerates SwiftKey’s ambition to reach millions of new users, especially in developing economies. It also creates a more sustainable business model in the app, where users can choose to pay for themes and other content to further enhance their experience.

In making the transition, SwiftKey is rewarding loyal users who have previously paid for the app. These users can download a $4.99 “Premier Pack” of 10 themes free of charge. The app’s core functionality remains intact.

In addition to new themes, today’s update brings several other user-requested improvements. Support for over 800 emoji is now integrated directly into the keyboard, with a new prediction feature that learns how emoji are used and predicts them as you type.*

An optional dedicated number row is now available for the keyboard, making it easier to input numbers. SwiftKey’s word prediction engine has also been improved, with better autocorrect and more accurate gesture typing, and new global languages have been added, bringing the total number supported to 66.

SwiftKey co-founder and CEO Jon Reynolds said: “This is the start of an incredibly exciting phase for us as a business. We have made the decision to go free to better enable everyone, everywhere, to use SwiftKey’s market-leading technology without payment being a barrier. We’re focused not only on reaching more users with our powerful technology, but on building great content and features to engage them.”

SwiftKey co-founder and CTO Ben Medlock said: “With the latest version of SwiftKey Keyboard, we’re providing an even more intuitive and personalized experience for our users, which they’re increasingly expecting. We’ve expanded our design team to focus on developing creative and beautiful user experiences. Our commitment to innovation has never been stronger and we are looking forward to sharing more exciting developments in the future.”

This updated version of SwiftKey Keyboard will include:

Stocked at launch with over 30 brand new themes, the SwiftKey Store will be regularly updated with fun customizable content.

In addition to the new themes in the Store, SwiftKey Keyboard now features a clean new default theme design, ‘Nickel’, available free to all users. Nickel was designed to be a modernization and ergonomic improvement to SwiftKey’s ever-popular Cobalt theme.

SwiftKey’s trademark prediction technology learns and proactively suggests from more than 800 emoji which are most often used with specific words and phrases.

Due to popular demand, this latest update introduces an optional number row for quick access without switching layouts or using long-press.

Investment in SwiftKey’s core technology is higher than ever with a host of prediction engine improvements, including better support for complex languages and multilingual typing. Capitalization has also been enhanced, as well as the technology’s overall learning ability.

Support for Belarusian, Mongolian, Tatar, Uzbek and Welsh has been added.

This gesture-based feature has been improved for better visibility and faster, more accurate input.

*Emoji are only supported on Android versions 4.1 and above. To enable emoji prediction, go to Settings > Advanced, and select the box marked “Emoji prediction.”