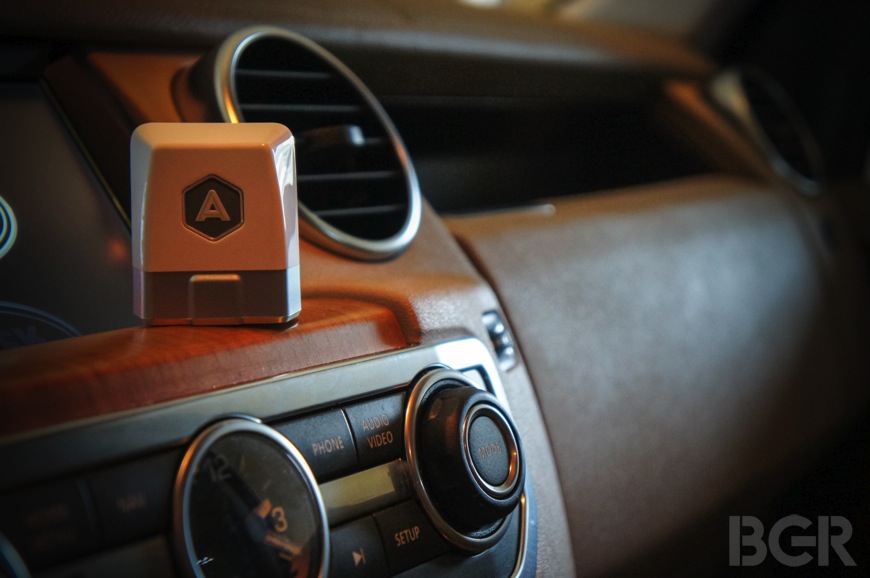 OBD-II. At a glance, you’re probably assuming that this is a little-known member of the Wu-Tang Clan who somehow escaped the 36 Chambers. Close, but no cigar. What it actually is is a specification embedded into practically every gasoline-powered automobile built since 1996, and if you’ve ever bothered to look above your gas pedal, you’ll probably see a rectangular port just waiting to be loved. Traditionally, that port has been used by mechanics with custom diagnostic readers in order to better describe what that warning light on your dash was about. Today, it’s empowering you — the all-important motorist. While OBD-II devices (and accompanying apps) have been around for years, Automatic’s Link is different. It’s beautiful. It’s elegant. And, perhaps most importantly, it just works.

From my perspective, the automobile is the next great mainstream frontier for technology to truly pervade. Comically long lead times — often reaching 7 years or longer — have prevented even high-end motorcars from embracing the newest of technologies, but tools like Automatic help to circumvent the issue. In a nutshell, the Link is a small, white nub that plugs into your car’s OBD-II port. It’s fairly useless without the accompanying app, which runs quietly in the background of your phone and speaks to the Link via Bluetooth. For now, the app is iOS-only, but a beta build is expected to hit next month for the Android faithful. What’s it do? Monitors your acceleration and braking to give you tips on better a more fuel-efficient driver, alerts people of your choosing should you end up in a crash, gives you instant information on any warning lights, and keeps a beautiful record of your trips without any effort on your part. To me, however, the real potential of the $99 Link has yet to be tapped. Head on past the break to hear why.

Look, I get it. You’re duly freaked out by the mere mention of working on a vehicle. Mercifully, the engineers at Automatic are looking out for you, and installation truly is a breeze. You simply download the Automatic app, load it up, create a profile, and follow the instructions. You’ll be told to pop the Link into your vehicle’s OBD-II port while it establishes a connection; after a minute or two, you’ll be set. No more messing around with the Link — plug it and forget it. You won’t even need to launch the app each time you plop down in the driver’s seat; just make sure your Bluetooth is on, and you’re golden. (It’s probably worth mentioning that while most gasoline-powered cars since ’96 are supported, there are a few that aren’t — a continuously updated list can be found here.)

Here’s a tip, though: at some point, you’ll be asked to hand over the names and phone numbers of up to three individuals that you’d like to be contacted should your Link detect that you’ve been in a crash. My recommendation is to give those three folks a ring prior to giving their information to the app. Why? Automatic automatically texts those three folks to let them know that they’ve been selected as a contact in the event that you’re in a crash. While that sounds fairly harmless, both my mother and my wife nearly had heart attacks when they received the SMS. Yes, the SMS spells out what’s going on, but when the human brain sees a text message with your name + crash + alert, the synapses start firing and one immediately assumes the worst. Sorry to get all psychological on you, but I’m trying to save lives here.

This thing feels like the future. You never have to touch the Link hardware itself, nor launch the app, once the setup is complete. So long as Bluetooth is active, it’s monitoring things in the background and accurately logging your trips, fuel economy, warning lights, where you parked, and whether or not you’ve been in a crash. (Of note: you will need to launch the app after each iPhone reboot.) And, in case the point hasn’t been driven home, the app is dazzlingly gorgeous. It’s the kind of product you want to use just because it looks so damn beautiful. The UI team could’ve easily built this app to display data in a crude fashion that’d still be tremendously useful, but their passion bleeds through — it’s only this lovely to look at because they put in the extra effort to make it so.

For those unaware, this is Automatic’s first product. The company was barely more than a bright idea on paper earlier this year, but with its engineering and design chops, I’m surmising that the Link is but the first of more great ideas to come. In my testing, I used an iPhone 5s, version 1.0.5 of the Automatic iOS app, and a $14 Arkon mount. Just so you’re aware, I was testing in a 2012 Land Rover LR4, which made the whole “drive differently to save fuel” portion of the process quite hilarious — more on that in the section below.

Those who sprung early were able to secure a pre-order at the initial $69 price point, but those buying in now will have to pony up $99 for the Link. Thankfully, the app continues to be free, and there are no recurring fees to worry over. If you’re taken aback by the cost of the hardware, just consider how much of that purchase price is going to continued testing and app development. Even in the weeks that I’ve had the Link, the app has evolved twice, adding the Crash Alert system along the way. To me, that kind of behind-the-scenes progress helps justify the up-front pinch.

Let me break down what exactly Automatic does:

In my testing, it does all of that with aplomb. But here’s the thing: it could do so much more, and there’s little preventing it from happening beyond the usual “time and resources” dilemma. I’d love a web-based analytics platform that ingests data from my trips and then offers me the chance to easily create bar charts, graphics, and Excel sheets. For number crunchers, it’d be excellent to have even more access to the data that Automatic collects for purposes of trip planning and trip evaluations. I wish that trips could be exported in some way so that the data isn’t forever trapped within the Automatic app. I wish that the app would recognize what kind of vehicle you’re driving and adjust your “Drive Score” accordingly; in other words, even grandma-style driving in a Land Rover is going to yield godawful mileage, but it doesn’t mean that I’m not doing all I can to eke out 19MPG when I should average just 17MPG. I wish that the app recognized what kind of fuel was needed and adjusted its price calculations accordingly — for example, the LR4 prefers Premium Unleaded. (To be fair, Automatic has confirmed in its FAQ that it’s hoping to add this soon.)

All in all, one of Automatic’s primary functions is to make you more aware of your driving habits in a bid to help you conserve fuel. I’m already an absurdly slow driver, so this portion of the functionality does me little good. I’d also like to point out how the device encourages you to drive more sanely. If you surpass 70MPH, brake hard, or accelerate too quickly, you’ll hear a variety of bleeps and bloops emanating from your floorboard. Frankly, it’s a bit distracting, and in the case of you braking hard to avoid a collision or an upcoming red light, it adds even more fear to the situation. I’m not a fan of the auditory alerts, but thankfully you can switch them all off in the app’s settings.

Where I’d like to see the platform go in the future is one that’s heavily driven by data — where trips are precisely tracked, suggestions are made as to what fuel stop is cheapest on the road ahead, and more specific intel is available to the end-user. As of now, only a few points of data are even presented to the driver, and it’s impossible to dig deeper into any of it. My gut says it’s just a matter of time before nerds like myself are granted access to that rabbit hole. Until then, however, Automatic is mostly a novelty. Those looking for an automated way to track mileage, fill-ups, etc. for tax purposes have no way to export all of this data, which begs the question: why not?

Battery life and other concerns

I’ll just be straight with you: I keep my iPhone plugged into a power source whenever I’m in my car. For those who don’t, the use of Bluetooth Low Energy keeps battery drain to a minimum. This is the same profile used in Jawbone’s new UP24 (among other doodads), and drain really is minimal. Automatic uses about 5 percent an hour while driving and about 0.25 percent an hour when you're not driving, but considering that you should really, really have an in-car charger, I don’t view this as a deal breaker.

For those concerned about multiple users and/or using Automatic with multiple vehicles, you can (mostly) rest easy. A single app profile can track up to five Link units installed across five different vehicles, which should satisfy everyone outside of the following professions: pro sports; movies; having Kardashian as a last name; drug dealer.

You can also have up to five app profiles tapped to monitor the same Link unit. As of now, you’ll need your co-riders to disable Bluetooth when they hop in as to not confuse the Link, but the company has affirmed that it’s working out a way to select which phone will track in the event that it sees two or more phones to send data to.

Yes: this is iOS only for now, and you’ll need an iPhone 4S or newer. Automatic has no plans to support Windows Phone or BlackBerry (you know, market share and all), though Android support should arrive in December. Unlike many companies I’ve covered, Automatic’s support team is impressively quick to respond, and its ever-growing FAQ will probably address any lingering concerns you may have before pulling the trigger.

Automatic’s Link is perhaps most impressive not due to what it can accomplish out of the box, but what it could do in the future. By being jacked directly into a car’s OBD-II port, it’s capable of collecting a mind-numbing amount of information, and I’m crossing my fingers that the company builds a proper analytics platform that lets power users dive in and explore the possibilities. At present, it’s hard to justify the $99 cost for those who a) already drive pretty conservatively and b) aren’t data nerds. That said, every man, woman, and child who climbs behind the wheel would appreciate an app automatically monitoring the warning lights, keeping tabs on their parking choices, and alerting their loved ones should they end up in a crash.

If the company ever allows the data to be unleashed and exported into sortable formats, the cost becomes far more sensible. Tracking mileage and fuel budgets is an incredibly tedious task — one that requires an inane amount of manual data entry. This app has the power to automate that process and help motorists make even smarter decisions on the road. Now we just have to hope that Automatic's engineering team is up to the challenge.