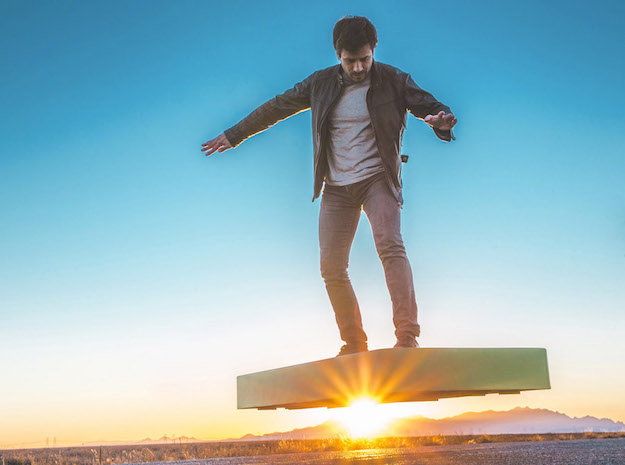 The most recent high-profile effort aimed at developing a legit hoverboard comes from ArcaSpace, a privately owned space company that just a few days ago released video of their latest invention: an “ArcaBoard” that can reportedly generate 430 pounds of thrust via a grid of 36 high-powered electric fans.

Though the ArcaBoard can get up off the ground, it’s hard to really be encouraged about the state of hoverboard innovation after watching the company’s promotional video. As you can see below, there’s simply no getting around the fact that the ArcaBoard just seems to awkwardly hover over the ground while the rider has to clumsily do his/her best to keep the entire contraption balanced. If anything, it seems more like a carnival ride than something you’d want to pay for, which you won’t be doing anyhow as this bad boy costs a whopping $20,000.

It’d be easier to be impressed with the ArcaBoard if the company didn’t take itself comically seriously. The video above is accompanied by New Age music and parody-worthy narration such as: “Can we truly be free? Can we feel it? Freedom. Now we can. We creatd a vehiecle, a tool that will grant you total freedom, freedom of movement, of travel, whereever you want, whenever you want. An extension of your will, of your creativity, of your desire to be free.”

As for the technical details, the company boasts that its hoverboard comes with 36 high power electric ducted fans that can deliver 272 horsepower and a maximum thrust of 430 pounds, “enough to propel you across land, water, snow or ice.”

It has a built-in stabilization unit, meaning that ArcaBoard is stable in any condition and is a very safe platform to fly on. You will be able to utilize your phone for control and navigation of the vehicle itself. But for the most intense experience you can turn off the stabilization system and steer the ArcaBoard with your body.

If you have thousands of dollars to throw around, we’d imagine there are better ways to spend it. But if not, you can supposedly pick up an ArcaBoard for $20,000. The in-box charger can bring the device to full power in 6 hours, though you can fork over an extra $4,500 for a special ArcaDock charging accessory that will bring the hoverboard to a full charge in just 35 minutes.

The website claims that orders will begin on April 15, 2016.

So while some are understandably intrigued by any device claiming to be a legit hoverboard, some remain skeptical. Engadget, for instance, thinks the device is nothing more than vaporware and a ill-conceived marketing stunt.

Lest we forget, what is ARCA Space Corporation anyway? Well, it used to be a non-governmental organization based in Romania, established in 1999 to develop rockets and other aerospace technology. Moving to Las Cruces, New Mexico last year, it adopted the name ARCA Space Corporation. The company’s currently developing rocket systems and serious, commercial drones (that seem to be behind schedule), but its history is a bit mysterious for our liking. In more than 15 years, it’s performed numerous tests of aerospace technology, but we can’t see that the outfit has ever really done, made or sold anything. Thus, we reckon it’s incredibly unlikely that the first commercial product ARCA Space Corporation will actually deliver is going to be an overpriced hoverboard no one wants.

And we’re inclined to agree. But even assuming that the gadget is legit, we can’t imagine anyone paying $20,000 for the riding experience it provides.