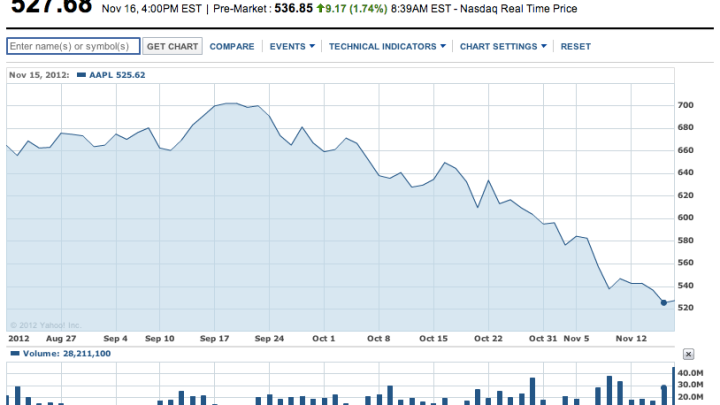 Sure, Apple (AAPL) shares might have been overvalued this past summer but that doesn’t mean their recent mega-plunge is any more justified. Topeka Capital Markets analyst Brian White sent out a note to investors on Monday that described the massive selloff of Apple’s stock that has been going on since late September as “insanely insane.”

White noted that the current selloff, which has seen Apple shares fall by as much as 28% from their peak value, has come despite the fact that “Apple’s net cash balance reached $121.3 billion at the end of FY12 or nearly $128 per share, which equates to 24% of Apple’s current stock price.” What this means, says White, is that “there is no reason why Apple should not currently be paying out at least a 3-4% dividend yield (or $16-$21 per share) versus the current 2% yield.”

White isn’t alone in his assessment that Apple’s stock is being undervalued at the moment. Asymco’s Horace Dediu last week posted an analysis of Apple’s stock prices and found that its wild boom-bust swings make relatively little sense from an economic perspective. What’s more, he found that a large drop in Apple’s share price will more often than not be followed by “a surge in earnings growth.”

Dediu speculated that the markets are just more prone to swings of irrational exuberance and depression with Apple compared to other stocks because Apple itself has been such an unpredictable company for so many years.

Shares of Apple were trading up more than 5% on Monday at the time of this writing.