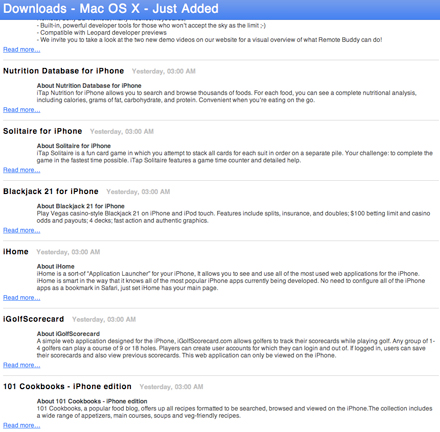 There were mumblings across the Internets about an Apple SDK for the iPhone….except, this wasn’t a real SDK. It was more of those guidelines for creating non-native applications by using Safari. It looks as if Apple is almost ready to officially launch their new database of applications, and you can think of it as sort of an “online Installer.app”. Some snooping around found http://www.apple.com/webapps (although it currently does not work), and better yet, in the recent downloads RSS feed, we can search for iPhone and find a couple applications in the catalog already. Some of these are: Nutrition Database for iPhone, Solitaire for iPhone, Blackjack 21 for iPhone, iHome, iGolfScorecard, 101 Cookbooks – iPhone Edition, Digital Tips, and iFun. To snoop around yourself, hit the link below and search though the entries for “iPhone”