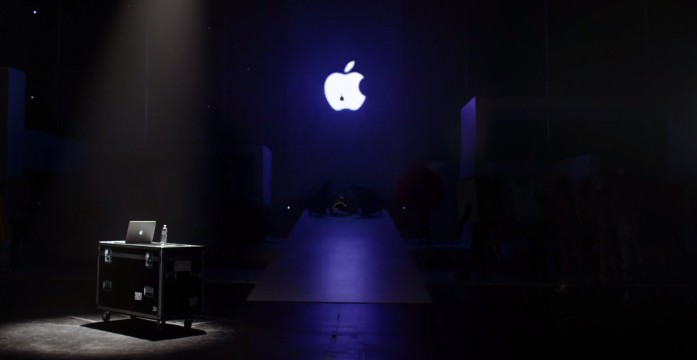 Apple opened its WWDC 2015 keynote with a strange, hilarious “backstage” video that showed off the purported “opening number that never made it” to the developer conference, and on Thursday it posted the entire video on YouTube.

Apple employed a bunch of well-known actors for this funny WWDC intro that spoofs Hollywood-like awards show. There are plenty or props related to apps and developers, and an entire opening act planed for the show. Too bad the rehearsal doesn’t go exactly as planned, and “genius” director David LeGary – played by comedian Bill Hader – has to improvise for the actual WWDC.

“What am I supposed to do with this, guys, we go live tomorrow. That’s just a bottle of water and a laptop,” LeGary asks, referring to the setup shown in the image above.

“I don’t know, I think it’s kind of pretty,” his assistant – played by Charlyne Yi – says.

To see the entire video, and the hilarious ending, check out Apple’s Backstage video below. And by the way, Veep’s Matt Walsh is also in it.