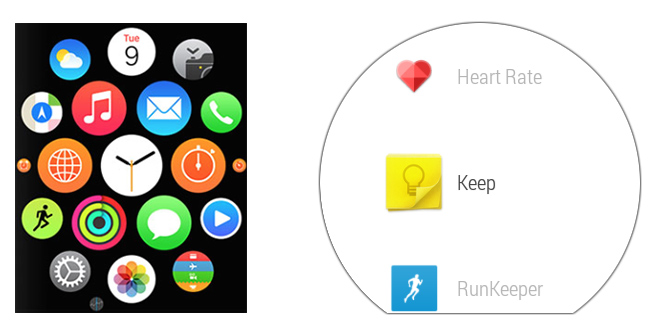 One thing that Apple has always done exceptionally well is to make clean, intuitive user interfaces that don’t overload you with too many unnecessary distractions. That’s why it’s somewhat surprising to see, at least at first glance, that Apple’s Watch UI looks much busier and cluttered compared with the more minimal approach taken by Google with Android Wear.

Ars Technica’s Ron Amadeo, who created the infographic earlier this week that mocked the iPhone 6’s 2012-era specs, has done an extensive side-by-side comparison of both the Apple Watch’s user interface and Android Wear’s user interface as shown on the Moto 360. Although Amadeo’s sympathies do typically lie with Android, his comparison still makes a persuasive case that Google and Apple have essentially switched their traditional roles for now when it comes to watch UI.

For example, when it comes to contacts, Google has decided to just make your contacts list voice-enabled so you speak to your watch to bring up the person you want to talk with. In the case of the Apple Watch, you have a list of tiny icons showing friends’ names and faces that you can scroll through.

Similarly, we can see the weather displays on each watch show that Android Wear’s is actually much simpler than the one we see on the Apple Watch.

Some caveats apply here, of course. This is not the final version of Apple’s watch UI and the company might very well spend the next few months cleaning it up and taking out unnecessary details. Secondly, no one has really done an extensive hands-on with the Apple Watch yet and we don’t yet know how well the device’s digital crown will work in navigating through the watch’s menus. If it works as well as Apple hopes it does then obviously it makes it easier to understand the busier UI since you won’t have to rely on a touch interface to go through your apps and notifications.

Amadeo’s full gallery of Apple Watch and Android Wear UI pictures is worth looking through and you can find it by clicking the source link below.