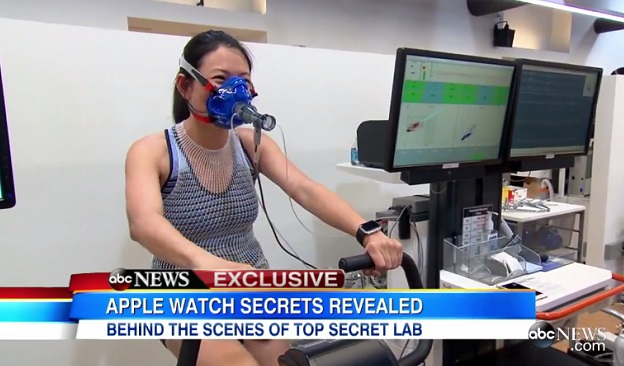 Good Morning America today provided us with our first glimpse into Apple’s secretive Apple Watch testing facility. Though Apple is notoriously stringent, if not downright paranoid, when it comes to product secrecy, they granted ABC cameras unprecedented access to their top secret health and fitness lab.

For nearly two years, Apple employees served as volunteers, human guinea pigs if you will, participating in a number of physical activities in order to better calibrate the Apple Watch’s ability to gather and interpret exercise data. From rowing and yoga to intense treadmill running, the Apple Watch was put through an assortment of high and low intensity workouts. As one might expect, the Apple employees were not specifically aware of the device they were helping to test.

A full segment on Apple’s testing lab is set to air tonight on Nightline. But to wet the palate, so to speak, ABC released a 3 minute teaser video that’s provides never before seen footage of where some of the more important Apple Watch testing took place.

Interestingly enough, Apple’s testing labs include climate chambers, enabling Apple’s data scientists and researchers to measure how the device performed in varying temperatures. What’s more, some Apple employees took the Apple Watch to far off corners of the world, including Alaska and Dubai, as to test it in more extreme weather conditions.

“I think we’ve amassed already what may be one of the world’s largest pieces of data on fitness,” Apple executive Jeff Williams said. “Our view is, we’re just beginning. The impact on health could be profound.”