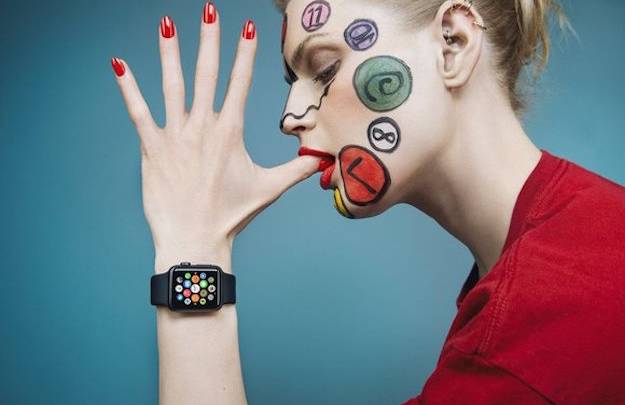 Did you know that the Apple Watch is currently in the midst of a world tour? Not a physical one, of course — we’ll have to wait until April for that — but rather a print tour, popping up in some of the most popular magazines around the world.

Last week, we got an early look at the spread appearing in the March issue of Vogue, and now China’s East Touch and England’s The Sunday Times have joined in as well.

Apple took over three pages in the Style supplement of The Sunday Times, with some bizarre photography of model Guinevere Van Seenus and a piece by Claudia Croft discussing her reluctant excitement for the Apple Watch:

“I want one. It’s not rational. I don’t need it. I already have an iPhone 6 and a vintage Rolex, but I want an Apple Watch like a four-year-old wants to eat cake at a birthday party.”

The spread in East Touch was a bit more traditional, featuring a young man wearing the Apple Watch in a series of different outfits.

If anything, this might help put to rest the idea that wearing a smartwatch is an unfashionable decision, as the Apple Watch is the least distracting part of either photo shoot.

We expect to hear and see more about the Apple Watch a week from today when Apple takes the stage for its “Spring Forward” event.