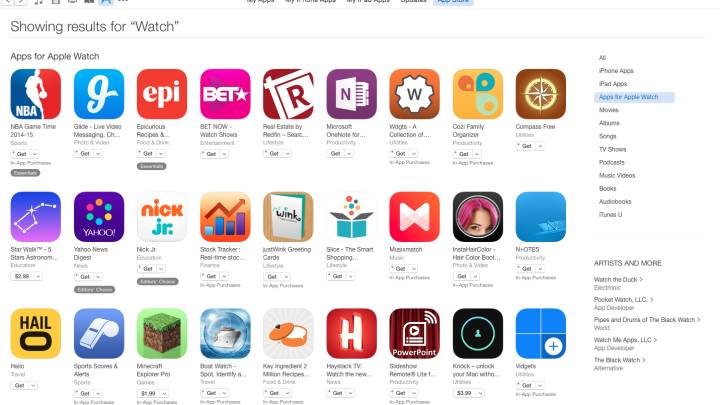 Anyone who’s getting their Apple Watch on Friday will surely be on the lookout for more apps for the device. There are plenty of ways to find updated iOS apps that include their respective Watch components, but the easiest one by far is going to the actual source of iOS apps: Apple’s official App Store.

DON’T MISS: Tidal is such a bomb that Kanye has already deleted any tweets mentioning it

Even though the Apple Watch isn’t here yet, there are plenty of apps ready for it, as they have received updates way before the April 24th Apple Watch launch.

In order to find them, just search for “Watch” the App Store, at which point you’ll get a variety of results, Wilson Rothman points out on Twitter. From the menu on the right side, you then have to select the Apps for Apple Watch option, which will get you a complete list of apps that have been updated for the tiny gadget (just like in the image above).

To actually check you’re in the right place, click on any of the apps in the list you’re getting (the screenshot above will differ depending on your country) and you should see an update interface for the app’s page that shows not only app screenshots for the iPhone and iPad, but also for the Apple Watch – see the example below for Epicurious.

If that’s not good enough for you, then you can also use this very handy tool for finding Apple Watch-compatible iOS apps right now.

Once you find the apps you want to install on the watch, you’ll have to use the official companion iOS 8.3 app that’s already on your iPhone to actually install the app on the Apple Watch.