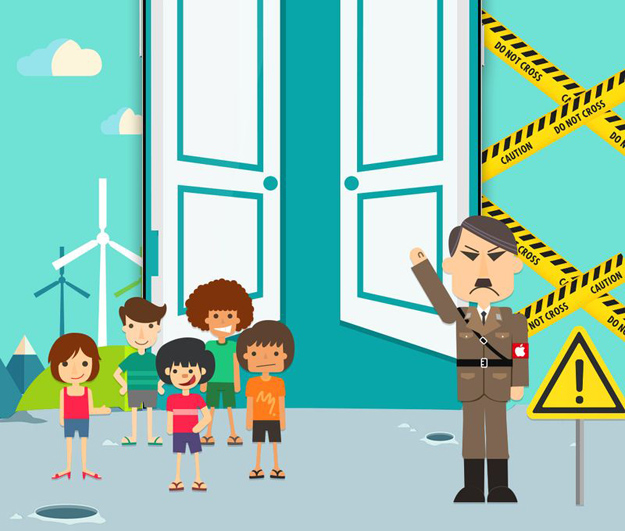 Billionaires often have a tendency to, shall we say, speak their minds freely. This apparently rings true for Chinese billionaires who are about to jump into the smartphone market, because LeTV CEO Jia Yueting just dropped a pretty big bombshell on his verified Weibo account.

We’ve seen rivals take aim at Apple in the past in an effort to generate some buzz. For example, Samsung regularly mocks iPhone users in its TV commercials. As common as it is to jab Apple, however, we have never seen a company go this far.

On Friday morning, Yueting posted this image on his Weibo account:

The text at the top of the image reads “Crowdsourced, freedom vs arrogance, tyranny,” and it shows two paths.

To the left is a group of happy children in front of mountains and a wind farm, eager to walk through the doors displayed on LeTV’s upcoming first Android-powered smartphone, the X900.

To the right, we find Adolf Hitler with an Apple logo in place of a swastika standing in front of caution tape and a warnings sign.

The image was accompanied by a post that reads in part, “Under the arrogant regime of iOS domination that developers around the world love yet hate, we are always carefully asking, ‘is this kind of innovation okay?'”

Yueting goes on to call Apple a “dusk empire,” and he says iOS does not promote true innovations. He then asks his followers how they would like to see the industry change. The answer, he hopes, will be found in LeTV’s upcoming X900 smartphone.