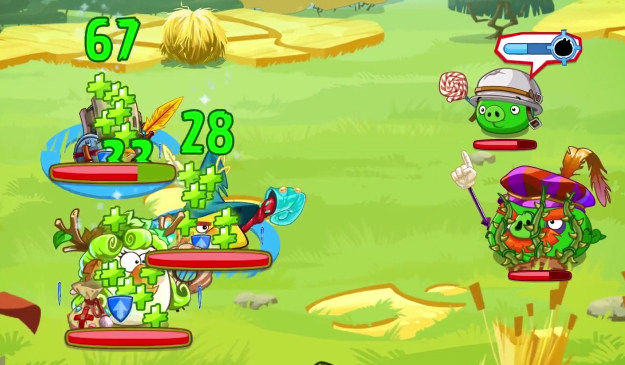 Rovio on Monday posted on YouTube an official gameplay trailer for its upcoming Angry Birds Epic game, revealing how this new role-play game looks and what kind of battles it will have to offer. The game is initially only available on iOS devices in three markets: Australia, Canada and New Zealand. According to the video, Angry Birds Epic will have a turn-based combat system that will be more than familiar to Hero Academy fans, departing from the tried and tested bird-slinging action from previous Angry Birds titles.

However, the battle phase will be part of a single player adventure on Piggy Island instead of multiplayer like in Hero Academy, pitting a team of Angry Birds heroes with special abilities against teams of AI-controlled green piggies, in a world “where silly costumes were fashionable” and weapons were “a bit different.”

Rovio says that “Angry Birds Epic offers an awesome storyline, turn-based combat, a gripping campaign with a challenging end game, a rich system of crafting weapons, armor and potions with resources the players can collect or purchase, and much more.”

While the company did not specify when the free game will be launched in other markets, or on other platforms, it did put up a webpage for the game, presenting several features of the new RPG title.