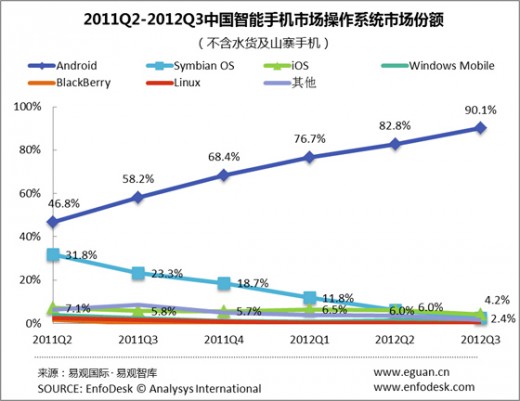 Little green robots have invaded China and conquered its mobile market. The Android operating system has seen substantial growth in the Asian country and is now estimated to have captured 90.1% of the market, a year-over-year increase from 58.2%. The numbers come to us from Analysys International, which in a new report also revealed that Apple’s (AAPL) Chinese market share declined from 6% to 4.2% in the same timeframe. Numbers for both operating systems may be higher than recent estimates, however. The research firm does not include knock-off Android smartphones, nor does it include iPhones that have been smuggled in from Hong Kong. Budget smartphones continue to be a hot seller in the country with the average price of an Android device being roughly $220, compared to the iPhone’s average of $720. While China has more than 1 billion mobile subscribers, Google’s (GOOG) mobile monopoly isn’t as lucrative as it sounds. A number of the Internet giant’s services are blocked or constricted in the country and make it difficult for it to capitalize on Android’s success.