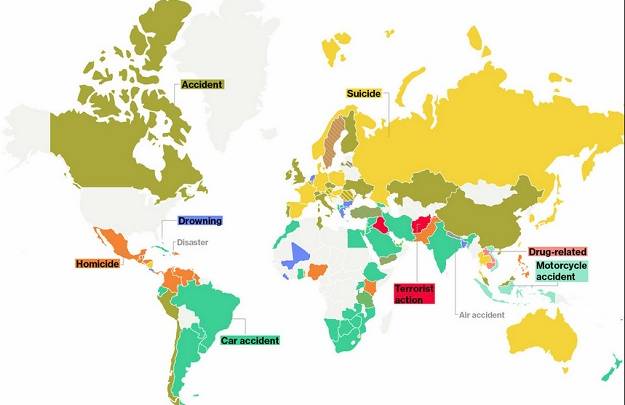 Every year, tens of millions of Americans travel abroad, with Europe and the Caribbean being the two most popular destinations. Inevitably, statistics bear out that an unlucky percentage of American’s travelling abroad end up dying in overseas locations. While some deaths are due to natural causes, most result either from some form of freak accident or violent crime.

Delving deeper into this topic, Bloomberg recently recently examined the most common causes of death to Americans during international travel.

As you can tell from the map above, the most common cause of death varies by continent and country. While homicide tends to be more common in Mexico and in the northern parts of South America, car accidents, on the whole, are seemingly the number one cause of death to American travelers, in a global sense. Indeed, as anyone who has traveled to various parts of Central and South America can attest, some of the road conditions there can be somewhat terrifying at times.

In much of the world, the causes of unnatural death for Americans abroad are similar to those at home—suicides and accidents, particularly car crashes. A handful of places show more unusual patterns: a high number of murders from Mexico across Central America and into Columbia, Venezuela, and Guyana; terrorist deaths in Iraq and Afghanistan; and drowning in coastal destinations, including many island nations in the Caribbean and South Pacific.

Also interesting is that suicide happens to be the leading cause of death to American travelers in both Russia and Australia. And though it’s hard to make out from the map above, the two countries where drugs are liable to do Americans in are Cambodia and Laos.

Of course, what the chart doesn’t tell you is the incidence of death in each respective country. To put these figures into perspective, Bloomberg notes that there have just been 8,000 reported American deaths over the last 10 years. Notably, this figure does not include military personnel.

Make sure to hit the source link below for the full run down on the leading cause of American deaths abroad. It’s an interesting read, especially if you’re thinking about packing up and heading out overseas anytime soon.