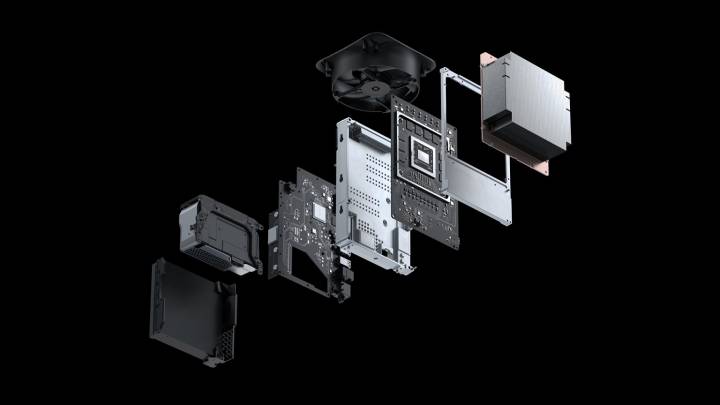 The world may be at a standstill right now, but that hasn’t stopped Microsoft from continuing to share new information about the Xbox Series X. Just a few weeks after revealing many of the most exciting features and specifications of its next-gen console, Microsoft is back with a detailed blog post about the technologies that will power the Xbox Series X, breaking them down into three main categories: Power, Speed, and Compatibility.

“While the Xbox Series X will deliver a massive increase in GPU performance and continue to redefine and advance the state of art in graphics with new capabilities such as hardware accelerated raytracing,” said Xbox’s Jason Ronald, Director of Product Management, “we don’t believe this generation will be defined by graphics or resolution alone.”

It all started with a strengthening of the partnership between Xbox and AMD, which resulted in a custom processor powered by 8 core AMD Zen 2 CPU and an RDNA 2-class GPU. (If you ever see terms you do not quite understand, be sure to visit the Xbox Series X Technology Glossary). AMD’s Corporate VP, Sebastien Nussbaum, says this is the “biggest generational leap of SOC [System on a Chip] and API design” the company has ever done with Microsoft, and as a result he expects the Series X to be “beacon of technical innovation leadership.”

Microsoft also finally shared a full spec sheet for the Xbox Series X, which you can see below:

Of all the exciting new technologies that will be present within the Xbox Series X, the one that Microsoft says will be the most noticeable to players is hardware accelerated DirectX Raytracing (DXR). “From improved lighting, shadows and reflections as well as more realistic acoustics and spatial audio, raytracing enables developers to create more physically accurate worlds,” the glossary explains. Here’s what Minecraft looks like with DXR:

One of the main reasons that the Xbox Series X will be so much faster than its predecessors is the addition of a solid-state drive (SSD). But the hard drive is just one element of Microsoft’s new Xbox Velocity Architecture, which consists of the custom NVMe SSD, dedicated hardware decompression block, the DirectStorage API, and Sampler Feedback Streaming (SFS). “Developers will also be able to effectively eliminate loading times,” Microsoft claims, and says that open world games like Final Fantasy XV and Red Dead Redemption 2 will benefit the most.

Microsoft also reiterated that game states will be stored directly in the SSD, which means that you’ll be able to switch between multiple active games at once without losing progress or having to reload any of them. Even if you power off the console, perform a system update, or unplug the Xbox Series X altogether, your game will be back up and running right where you left it when you go back to it next, all thanks to Quick Resume.

“The community’s response to Phil’s announcement of 360 backward compatibility at E3 2015 was one of the biggest career highlights for me in my time as part of Team Xbox,” said Jason Ronald.

Therefore, it was clear that backward compatibility would need to be a focus for the Xbox Series X as well. Not only will the new console play thousands of Xbox, Xbox 360, and Xbox One games, but the games will see the benefits of the hardware as well, with “improved boot and load times, more stable frame rates, higher resolutions and improved image quality.” Plus, all of your game saves and progression will come with you.

If you want to know more about the hardware and software that powers the Xbox Series X, be sure to read the entire blog post on the Xbox Wire and check out the incredibly helpful Technology Glossary as well.