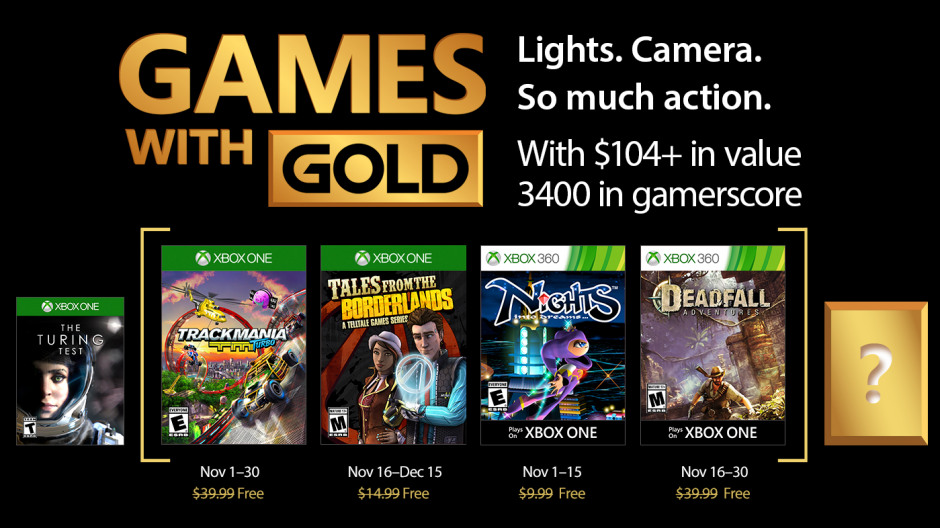 As if this week wasn’t busy enough with the release of Super Mario Odyssey, Wolfenstein II: The New Colossus and Assassin’s Creed Origins, Microsoft has given us even more to think about with the reveal of November’s free Games with Gold. As always, you’ll need an active Xbox Live Gold subscription to download the games for free.

While there isn’t one major standout this month, all four games will be worth adding to your collection next month. Tales from the Borderlands is one of Telltale’s best adventure games, Trackmania Turbo is a solid, breakneck racer and Nights into Dreams… is a fantastically unique action game with a great soundtrack. I don’t really know anything about Deadfall Adventures, but it kind of looks like a mix between Uncharted and Doom.

You’ll save over $100 if you pick up all four games and can add up to 3400 points to your gamerscore. Also, keep in mind that each of the Xbox 360 titles are backward compatible with the Xbox One, so even if you don’t have an Xbox 360 on hand, you can still download all four games listed above.

You can check out footage of all four of November’s free Games with Gold in the video below: