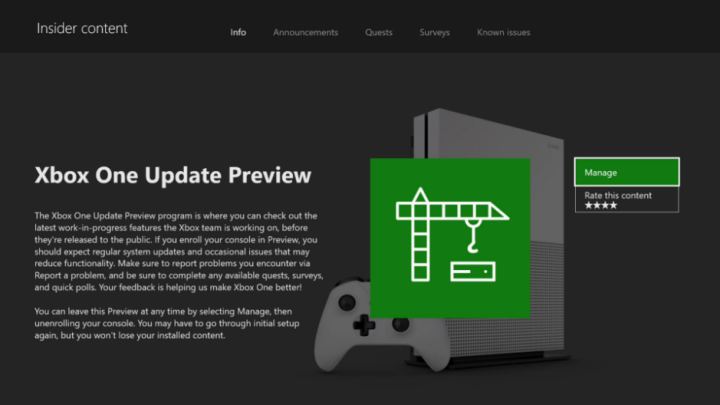 Microsoft is giving the Xbox Insider Program an upgrade. Although the program has always given dedicated fans the opportunity to try out software updates before they roll out to the public, Microsoft is adding a new “skip ahead” ring to the Xbox Insider Alpha ring, allowing members to access advanced builds months out from general availability. It’s an idea smartly lifted from the Windows Insider Program, which introduced something similar months ago.

In the coming weeks, Alpha members will be able to opt in to the “Alpha – Skip Ahead” ring, with other rings set to be added later by invitation. The advanced builds will include features and apps from Redstone 5, which, as the name of the ring implies, is still several months out from being ready for public consumption.

“By piloting builds well in advance of their release, Xbox Insiders will play an even bigger role in shaping the future of Xbox and will be able to communicate their sentiment and suggested changes to members of the Xbox Feature Team via Quests and Surveys found within the Xbox Insider Hub,” explains Xbox Program Manager Savannah on the Xbox Wire blog on Friday. “Community and fan feedback has never been more critical to helping craft the future of the Xbox ecosystem – and we thank you for your time and thoughts!”

When the “Alpha – Skip Ahead” ring opens later this month, all Alpha ring members will be able to decide whether to remain in their current ring on a Redstone 4 build or enroll in the new ring. Insiders can change their enrollment status at any time on the Xbox Insider Hub though, so you can always jump back and forth.