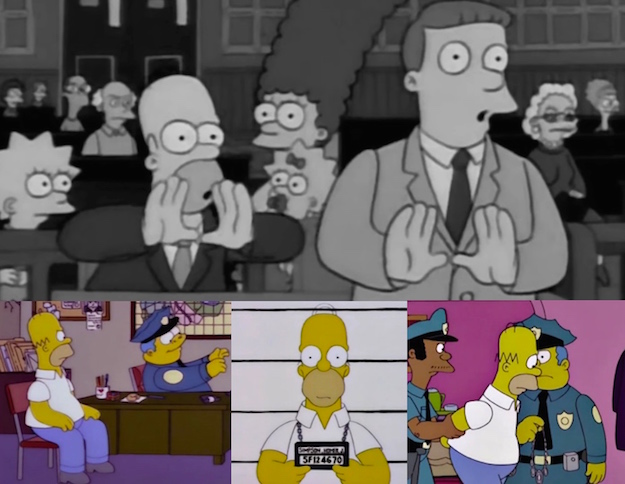 Earlier today, Vulture released an expertly crafted mashup that takes the plot of Netflix’s Making a Murderer and applies it to the universe of The Simpsons. The brilliant mashup centers on Homer, cast in the role of Steven Avery, being sentenced to prison for crime he didn’t commit (murdering Mr. Burns), only to be released and then re-arrested for murdering someone else just two years later.

I was a bit skeptical when I first came across this video as I’ve seen quite a few lackluster Making a Murderer parodies surface over the past few weeks. But the folks at Vulture really hit it out of the park with this particular effort. By combining some of the themes and moRE memorable pieces of dialogue from the Netflix docudrama with perfectly curated and recognizable clips from The Simpsons, the video stands on its own as a legit parody and is doubly funny for those who can place the out-of-context clips littered throughout the video.

Outsider. Family man. Occasional troublemaker. Shabby dresser. Repeatedly accused of crimes in a city where the police are far from reliable. All these descriptors fit Steven Avery, the accused murderer at the heart of Netflix’s hit documentary series Making a Murderer … but they could also fit beloved cartoon oaf Homer Simpson. In this week’s Vulture Remix, we imagine a trailer for a hard-hitting exposé of a flawed criminal-justice system in the all-American town of Springfield.

An A+ idea impressively followed up with some A+ execution.

I’m nitpicking here, but the only things missing were perhaps a Brendan Dassey role (maybe for Bart or, better yet, Millhouse) and Chief Wiggum exclaiming, “Bake him away toys.”

And for any true Simpsons fans out there, you’ll likely remember that this isn’t the first time Homer has been accused of a crime he didn’t commit. We saw this same song and dance play out long ago during the Season Six classic “Homer Badman” where we saw Homer wrongly accused of sexual harassment.

Making a Murderer the simpsons