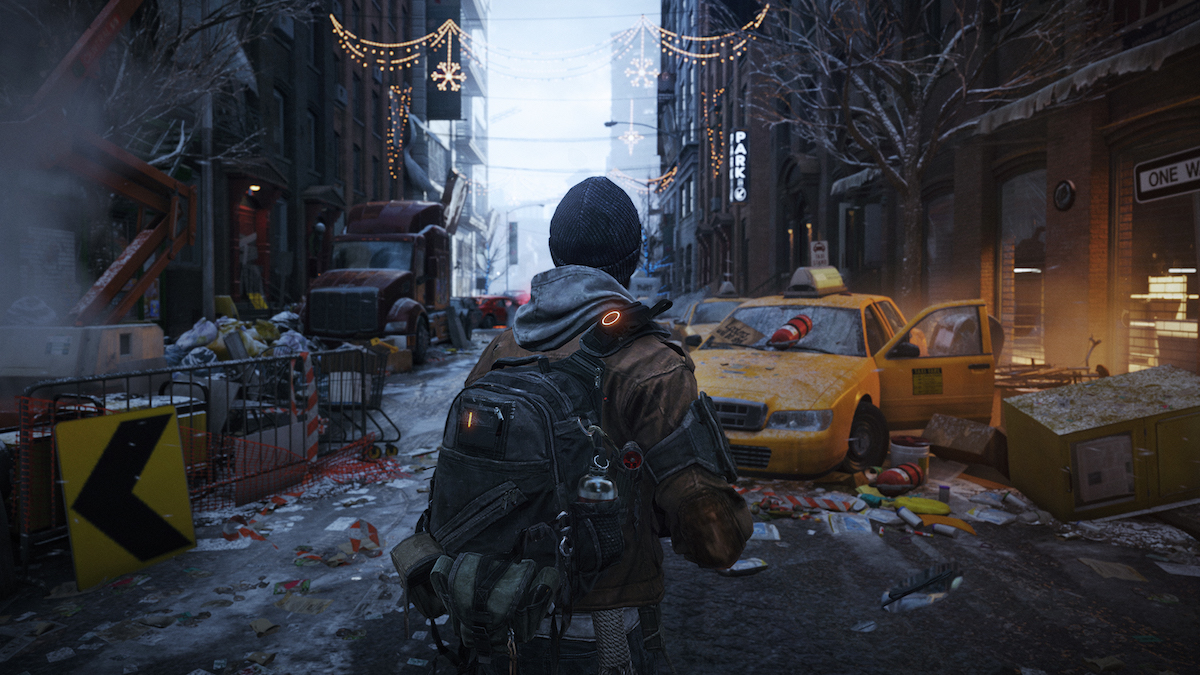 The Division is a lot of things. First and foremost, it’s a competent, if unimaginative, third-person shooter. It’s an RPG as well, with plenty of loot to collect and experience to gain and skills to choose from. It also shares a great deal in common with the modern MMO, in that you’re never more than a few button presses away from teaming up with other players online.

This kitchen sink approach has doomed other equally ambitious games, but The Division manages to stay afloat, even underneath the weight of all the adjectives that describe it.

You start the game on the Chelsea Piers, but within seconds, you’re being ushered into the city proper, winding your way through the West Side until you reach the Farley Post Office Building, which serves as the base of operations for your character throughout the campaign.

Before you can enter, you’re forced to take down a roving gang of baddies outside the building. During this firefight, I was keenly aware of the health bar on the enemies chipping away at a glacial rate.

Unlike in Destiny (a game which has been repeatedly compared to The Division for fairly obvious reasons), the standard enemy doesn’t go down with a single headshot. Even a run-of-the-mill goon can take a full clip to dispatch.

It’s not an altogether negative development, but the reason that a game like Destiny can survive the wave of criticism that it (rightfully) received is because the fundamental gameplay is fast, fluid and fun. I wouldn’t use any of those words to describe the shooting in The Division, and despite the fact that the game does a whole lot right, I couldn’t get over how long it took just to take down a low level thug during a mission.

But even though the shooting on its own can’t hold my attention, I could see myself becoming hopelessly entangled in all of the game’s various systems. From unlockable skills to upgradeable gear to a wide variety of attachments for each and every weapon, this is a game tailor-made for players who love gathering loot.

I’ve only had a limited amount of time to play around with these systems, but the slick UI made every alteration feel almost tactile, which is vital in a game where your gear is going to be out of date every half hour or so. The Division needs to make you want to open up a menu and swap out a backpack or pair of gloves, and I think it succeeds on that front.

The real showstopper though is the Dark Zone, The Division’s version of player vs. player (PvP) content. Split off from the rest of the city, the Dark Zone is filled with other players at all times. Those players might be allies looking to party up and collect some of the game’s best loot with you, or they might be waiting for you to turn around so they can stab you in the back and steal your stuff.

Having only explored the Dark Zone for about an hour, I’ve already experienced some of the best that the game has to offer. Hearing a flurry of gunshots in the distance while tagging along with a few strangers, you can sense the tension as it spreads through your group. Do we risk the loot we’ve collected to see what’s happening? Or do we head straight for extraction zone and wait for a helicopter to come safely remove and decontaminate the guns and gear we’ve found?

Everyone being neutral by default makes for a far more entertaining experience than what most MMOs have to offer when it comes to open world PvP. The minute you gun someone down in cold blood, your name is marked for every other player to see. They can take you out without any consequences, so you’d better have a friend or a contingency plan if you’re going to survive.

I think The Division is going to either thrive or collapse based on how well all of the pieces hold together after hours and hours of gameplay. If a single brick in this building gets knocked out, the whole thing could come crumbling to the ground. If it all works in tandem, we might be in for one of the more interesting console experiences of the generation.

PC PlayStation 4 The Division Xbox One