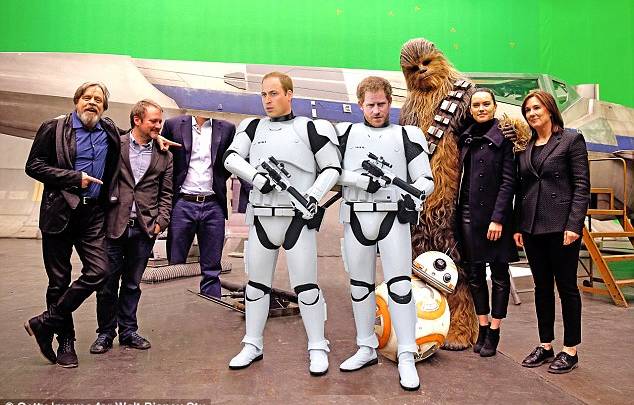 Filming continues for the upcoming eighth episode of the Star Wars saga, with a report suggesting that Disney will use some unexpected Stormtrooper cameos once again, just like Episode VII. In Star Wars: The Force Awakens, none other than Daniel Craig took on the role of a Stormtrooper, and he even had a few lines of dialogue – if you’re good with voices, you’ll know which one he was.

In the untitled Episode VIII, which is set to premiere in mid-December next year, we’ll see at least two more well-known celebrities hide in Stormtrooper armor. This time around they’re not actors, but they’re certainly famous. And, ironically, they’ll play empire servants even though they’re in line to actually run an empire in real life.

Princes William and Henry have secretly filmed Stormtrooper scenes for the next Star Wars movie during their visit to the set last week, The Daily Mail reports. Images showing the two royals playing with Star Wars props on the set surfaced last week, but it wasn’t known at the time they were actually filmed for the movie.

According to the Mail, the brothers appeared alongside Daisy Ridley (Rey), John Boyega (Finn) and Benicio del Toro (Lord Vikram). The scene involves Rey and Finn infiltrating a secret base. The rebels are in an elevator with Lord Vikram when a group of Stormtroopers, including the princes, enter.

Apparently, after posing for official photo shoots, William and Henry went on to shoot their scene and only the director, producer and essential crew knew about it.

“The line given was that they were going to have lunch and a private tour of the rest of the set,” a source told the paper. “What really happened is that the director came over and told them it was time to ‘get suited’ and off they went to the wardrobe department.”

The princes’ spokesman would “neither confirm nor deny” whether the pair will appear in the movie, but he said the Princes had a great day at the event.

Future King of England Prince William even presented a birthday cake to a crew member while wearing the Stormtrooper costume. That’s probably as good as it gets if you like Star Wars.