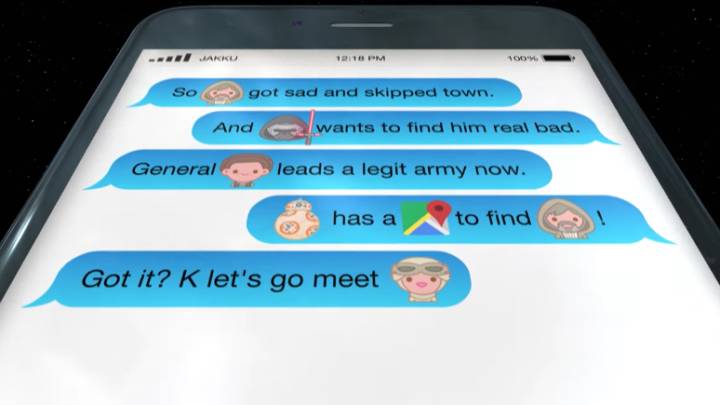 Star Wars is a huge phenomenon and Disney is making sure the hype continues now that its hit movie has already been released on Blu-ray, DVD and digital HD download. Star Wars: The Force Awakens proved to fans there’s hope for the Star Wars universe, and it made a boatload of cash for Disney in the process. While we wait for Rogue One and Episode VIII to roll out, Disney decided to reshoot Episode VII for us, retelling the story in an entirely different way — with the help of emoji.

I have to say that it’s not as bad as you’d expect, regardless of how it sounds at first. And Disney isn’t the first company that thought of remaking movies with emoji. Sony already set a launch date for August 2017 for its upcoming animated film about the cute little graphics.

But these Force Awakens inspired emoji, as well as Disney’s emoji-storytelling skills, are impressive. The emoji force is definitely strong with this studio. I particularly liked the mind duel between Rey and Kylo Ren in this new emoji universe, and there are a few other notable moments as well.

This episode of the As Told by Emoji series is actually the first one in the second series. The first series had four episodes, netting Disney 50 million views on YouTube.

As a side note, it’s pretty clear that Disney used Apple’s iPhone and iPad to create the animation, even though it tried to hide their identities using square home buttons. The software elements, however, tell us this emoji universe lives inside a very iOS-like operating system.