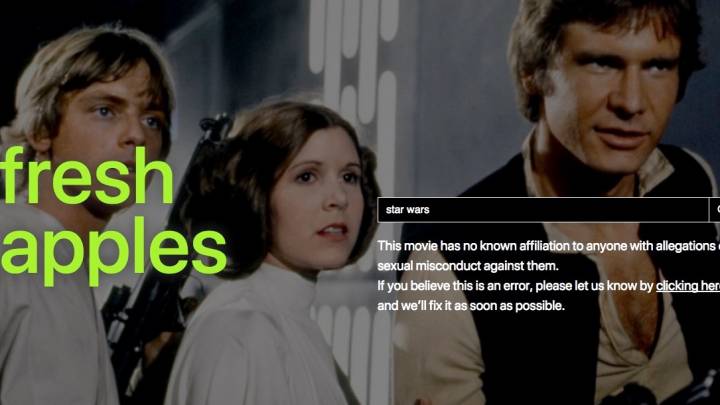 Ever since the Harvey Weinstein revelations, we’ve seen more and more stories detailing sexual abuse in all sorts of places, especially the entertainment business. Day after day, the #MeToo campaign has given courage to victims to speak against their aggressors. We also saw plenty of actors fired and shows canceled in the aftermath of these revelations. A senator resigned, while a Senate candidate lost an election because of such behavior.

I’ve personally decided to boycott those movies, TV shows, and any other form of entertainment starring some of the men that were accused of sexual misconduct. It may be easier said than done, considering that new nasty revelations come up on a regular basis. But there’s a site that will tell you whether any cast member of a movie or TV series has such accusations hanging over their head.

Called Rotten Apples, and launched earlier this week, the site has a simple enough interface. You just have to enter the name of the movie or TV series you want to inquire about, and it’ll return two types of results. “Fresh Apples” shows up when a movie has “no known affiliation to anyone with allegations of sexual misconduct against them.” Phew, Star Wars seems to be safe for the time being.

As you might have guessed, the other rating is “Rotten Apples,” and you’ll see it display on the screen when there’s at least one cast member with allegations of sexual misconduct.

“It’s an easy way to single out those individuals,” Tal Wagman told The New York Times. Wagman works as an associate creative director at advertising company Zambezi, and he came up with the Rotten Apples concept with three other colleagues as a side project.

“We’re definitely not advocating for boycotting anyone’s films,” he said. But the tool is meant to help people make “ethical media consumption decisions” if they so desire.

If you search for House of Cards, Kevin Spacey’s name will come up, the lead actor of the popular Netflix series who’s been fired from the show. A search for Kill Bill will list the producers, Bob and Harvey Weinstein. Clicking on a person’s name will open a different tab in your browser, that loads an article detailing their reported sex misconduct allegations.

The database will be continuously updated from reputable sources, the creators said.