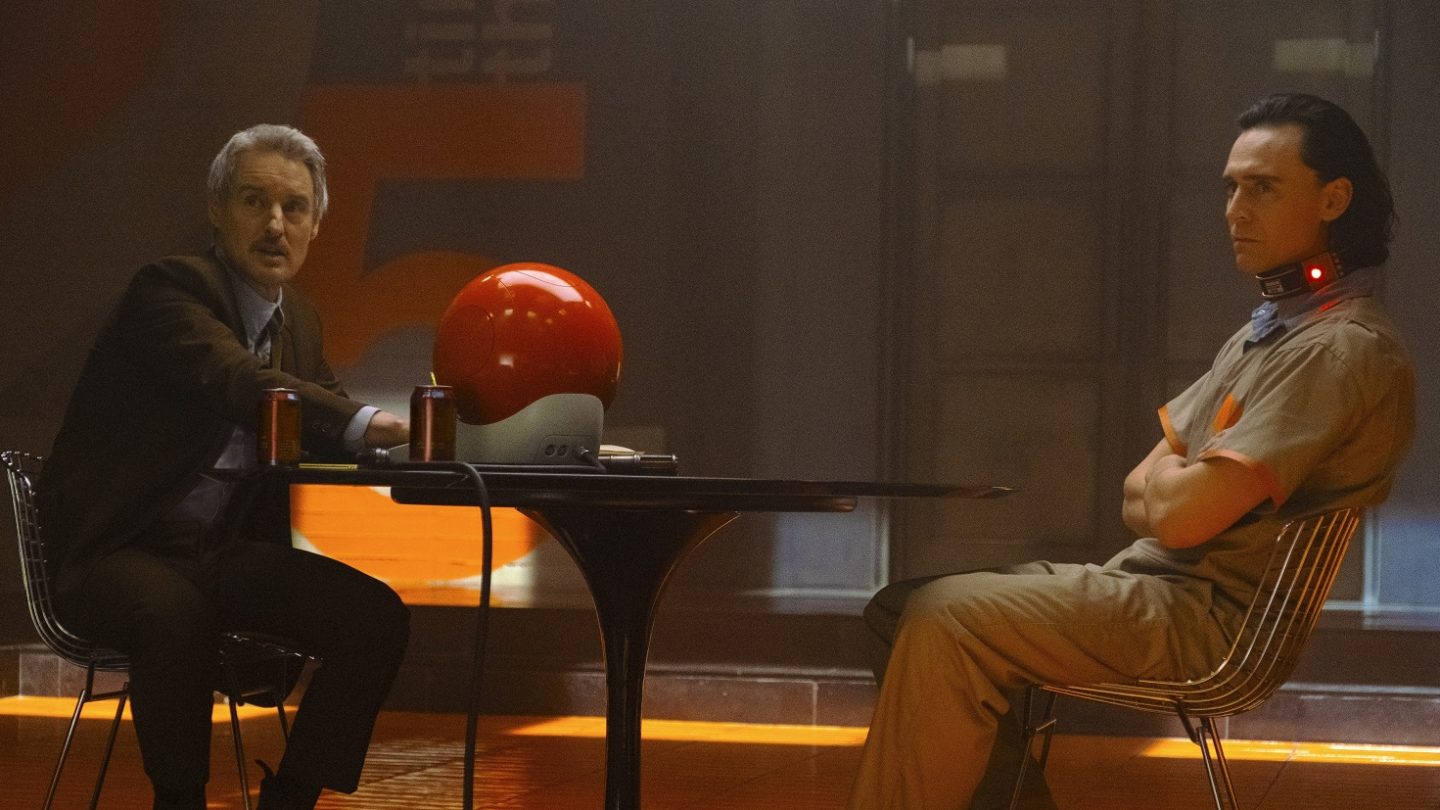 Six and a half weeks after The Falcon and the Winter Soldier ended, Marvel Studios has returned to Disney+ with its third original series of 2021. Loki premiered on Wednesday, and just like its predecessors, the show will be released on a weekly basis, rather than all at once. As such, we thought it might be fun to recap each episode as they debut over the next six weeks.

There will be major spoilers for the first episode of Loki below, so if you haven’t watched it yet, maybe bookmark this page and come back after you’ve had a chance to stream it.

Whereas WandaVision and The Falcon and the Winter Soldier pick up weeks or months after the events of Avengers: Endgame, Loki actually opens on a scene from that very movie — the scene in which the Tesseract winds up at Loki’s feet, which he promptly uses to escape.

We never saw what happened to this timeline’s Loki in Endgame, but the show immediately takes us to the Gobi Desert in Mongolia, where a blue light streaks across the sky before piercing the sand. This is where the misplaced Loki ended up while the Avengers were stopping Thanos.

The god picks himself up off the ground and is swiftly confronted by confused locals — who he tries and fails to intimidate — but before he can even get his bearings, a portal opens up a few yards away, through which armed guards emerge. Loki is being placed under arrest for violating something called the Sacred Timeline, and although he attempts to fight back, he doesn’t stand a chance against these mysterious humanoids. He gets a smack in the face, a collar around his neck, and is dragged into the portal while the guards activate a device to reset this timeline.

If you’ve watched any of the trailers for Loki, you already know that the armed guards are agents of the Time Variance Authority, and that’s exactly where Loki has been taken to answer for his crimes. At this point, Loki is processed, which involves having both the Tesseract and his clothes confiscated. He then enters a room in which he is asked to take a ticket. The Asgardian prince begrudgingly does so after the other criminal in the room refuses.

We then watch along with Loki as the TVA mascot, Miss Minutes, appears on a nearby TV to explain the TVA. Long ago, a bunch of timelines went to war with one another, which nearly destroyed reality. The three Time-Keepers then emerged to reorganize the multiverse into one timeline, which is known as the Sacred Timeline. This is apparently the timeline that we have been following since the original Iron Man movie all the way through Avengers: Endgame and beyond.

The Time-Keepers now ensure that time continues to flow smoothly, but sometimes people disrupt this flow. These “variants” create nexus events that could potentially result in another multiversal war. In order to account for this, the Time-Keepers created the TVA and everyone who works in it. TVA agents pursue variants and put the timeline back on track.

Loki, unsurprisingly, is unconvinced by the informative video, but then turns around to see his fellow variant be disintegrated by a TVA agent after the variant couldn’t produce his ticket. Loki pulls his out of his pocket right away and is taken into a courtroom to stand trial.

But before we watch Loki take the stand, we cut to the scene of a murder in 16th century France. TVA agents are at the scene of the crime in search of a suspect, and the agent in charge speaks to a young French girl who points to a stained glass painting of a devil when he asks who was responsible.

Back at the TVA, Loki is pleading his case with a judge, who finds him guilty, but before he can be taken away to be reset, Agent Mobius comes to collect him, which no one else at the TVA looks to be on board with. Mobius takes Loki into a room labeled “Time Theater,” where he probes the lost god about his motives. Loki says that if he could return to “Midgard” (aka Earth), he would defeat the Avengers and take over the world. Mobius then forces Loki to watch scenes from his past as well as his future, in which he caused the death of his own mother.

Sparks begin to fly between the two, but Mobius is called out of the room by the agent who arrested Loki on Earth to deal with a situation. Mobius returns moments later to find that Loki has vanished and that the clicker the agents were using to rewind Loki every time he acted out had been stolen. Loki returns to the lobby where he was relieved of the Tesseract and forces a man named Casey to give it back to him. Casey opens a drawer that contains not only the Tesseract, but also about a dozen Infinity Stones from various timelines.

“Some guys use them as paperweights,” Casey tells Loki.

This is something of a turning point for Loki, as he comes to terms with the fact that any organization casually tossing universe-altering gemstones into desk drawers is probably as powerful as they say they are. He returns to the Time Theater, binges the rest of the highlights from his “correct” future, and watches in horror as Thanos chokes the life out of him. The original arresting officer eventually finds him, and although he succeeds in taking her down and strapping the collar to her neck, Loki knows that he’s stuck. Though he does enjoy rewinding her a few times.

Mobius strolls in, and Loki finally explains why he felt the need to hurt and kill and cause so much chaos. This is what Mobius needed to hear before he could ask Loki to help him track down a dangerous variant that was killing TVA squads. And if you’re wondering why Loki is best suited for the job and why Mobius felt the need to psychoanalyze him: The murderous variant is also Loki.

The episode ends in Salina, Oklahoma in 1858, where the same crew that was investigating the murder scene in France has found a scepter planted in the ground, surrounded by oil. They prepare another reset charge, but suddenly, a hooded figure appears with a lantern, which it drops to the ground, enveloped the entire field in flames. The agents die before they can set the charge.