Over the past few years, Apple’s cash hoard has swelled to near unthinkable levels. Per the company’s most recent earnings report, Apple now has more than $237 billion in cash and other securities, anchored of course by the company’s insanely lucrative iPhone. Though the iPhone only has a thin slice of smartphone marketshare, Apple’s iconic smartphone accounted for an astonishing 104% (yes, you read that correctly) of the profits across the smartphone industry last quarter.

With so much money in the bank, it’s only reasonable to ask what the company plans to do with all of growing cash pile. The situation is a bit tricky because the vast majority of Apple’s cash (more than $200 billion) resides in overseas accounts. The following chart, compiled by Statista this past August, provides an instructive illustration of Apple’s current cash position. 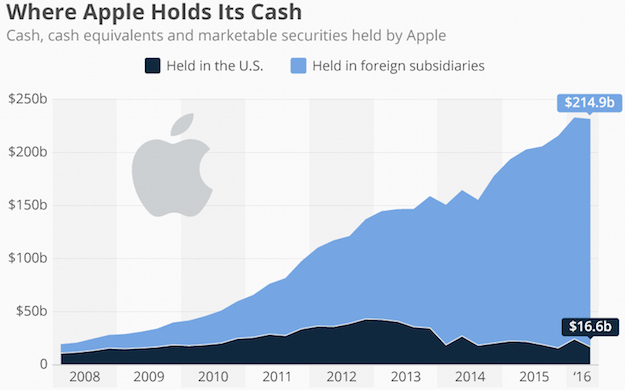 As a result, if Apple were to bring that cash back stateside, it would be subject to the United States’ uniquely high 35% corporate income tax rate. Apple, therefore, has opted to let its cash sit overseas rather than take a huge tax hit and bring it back. Apple’s strategy in this regard, we should point out, is hardly unique. On the contrary, many large companies — from Google to Pfizer — hold billions of dollars in offshore accounts because they too want to avoid a large tax hit.

With Donald Trump poised to assume the Presidency this coming January, Apple may be able to repatriate some of its overseas holdings sooner rather than later. Per Donald Trump’s tax plan, companies like Apple would be afforded the opportunity to repatriate foreign holdings at a significant tax discount.

As detailed on Trump’s website, Trump’s tax plan for businesses “will provide a deemed repatriation of corporate profits held offshore at a one-time tax rate of 10 percent.”

The language here might also suggest that company’s with vast cash holdings overseas will be taxed at 10% regardless of whether or not the cash is repatriated. That said, we’ll have to wait and see what Trump’s tax plan actually looks like once he assumes the Presidency.

The savings Apple would enjoy with Trump’s tax plan would be immense, to say the least. In a hypothetical scenario where Apple opts to repatriate, say, $50 billion, Apple under Trump’s plan would save more than $12 billion.

Apple and other large multinational companies have been lobbying for a one-time tax holiday for years now. As a quick example, Tim Cook back in 2013 had this to say on the topic during an interview with the Washington Post.

“If you look at it today, to repatriate cash to the US, you need to pay 35 percent of that cash,” Cook said. “And that is a very high number. We are not proposing that it be zero. I know many of our peers believe that. But I don’t view that. But I think it has to be reasonable.”

The last time we saw the powers-that-be approve a one-time tax holiday was back in 2004 when companies were allowed to repatriate their offshore holdings with a generous 5.25% tax rate. Strictly speaking, Trump isn’t exactly offering a tax holiday if the 10% tax rate is enforced across the board, but the posited rate is low enough such that many companies like Apple would likely bring back their cash happily.