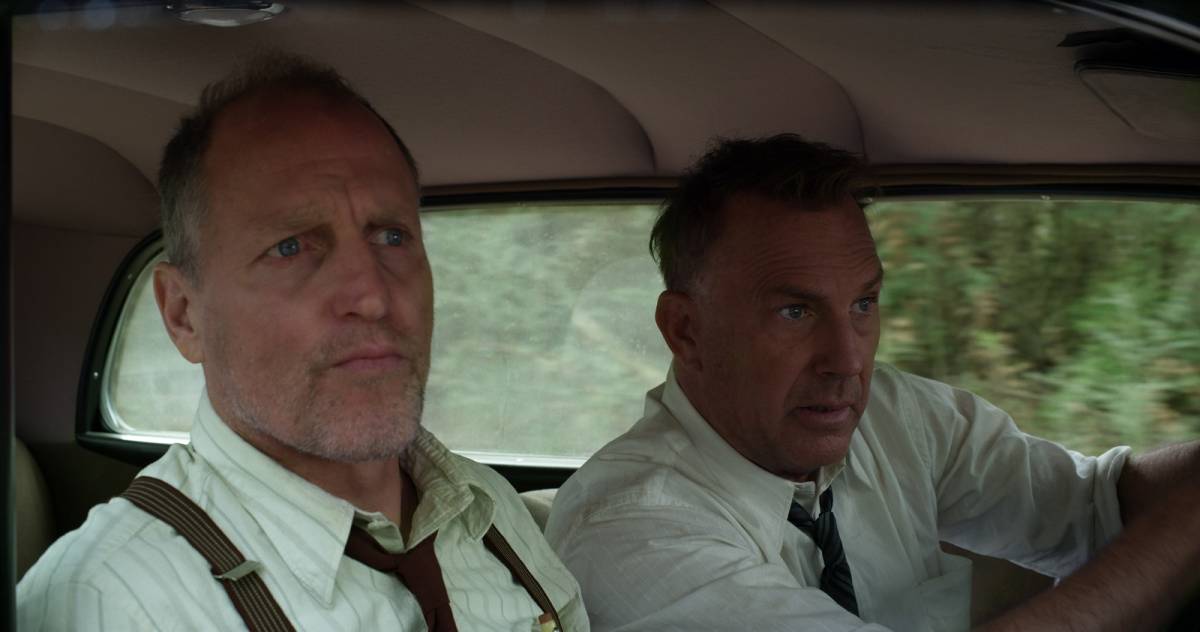 Director John Lee Hancock has been trying for 13 years to make a movie about outlaws and the grizzled lawmen who hunt them down. Not just any outlaws on the lam, mind you — Bonnie and Clyde, the Depression-era celebrity bandits who went on a robbing and killing spree that ended with the pair cut to pieces in a hail of gunfire. Hancock wanted to tell this story from the point of view of the guys with badges who brought the legendary bank robbers down. So the director, whose past credits include films like The Blind Side and Saving Mr. Banks, started checking all the usual items off his list.

Script acquired, check. High-profile actors committed – Kevin Costner and Woody Harrelson, check. Likewise all the sumptuous visual elements of a period drama, which in this case meant everything from sleek black tommy guns to dust-caked shanty towns and paunchy Texas Rangers past their prime. But then an unusual element got added to the mix — backing from Netflix, which allowed his project to finally make it over the finish line and into theaters starting this weekend for a limited engagement, ahead of a Netflix debut on March 29. Which is when most viewers will behold Hancock’s and the rest of the cast and crew’s work in the palm of their hands, on smartphone screens — something the director acknowledges still feels a little strange to him, even while he confesses he wishes he’d have had this option a lot earlier in this career.

“Through the years, there was always different interest from people,” Hancock said in a phone interview from SXSW, where Netflix hosted the movie’s world premiere. The streamer also set up a period-appropriate speakeasy at the conference, at which Father John Misty played a set.

“People always liked the script, it was just from a studio standpoint — it’s a tough gig for them, because they’re looking at, like, do 15-year-old boys want to see this movie or not. I’ve had movies in the past that I thought were great movies that didn’t quite catch on in the theaters.”

Which is why releasing The Highwaymen this way, Hancock continued — a limited theatrical run, followed by dropping it onto Netflix so that its tens of millions of subscribers all have simultaneous access to it — felt like “the right thing to do.”

If you paid attention all to the run-up to the Oscars last month, you know that the service put its black-and-white drama Roma, about a domestic worker in Mexico City in the 1970s, up for consideration as a Best Picture contender. Netflix came up short there but ended up taking home a few other golden statuettes instead, which left Hollywood with a couple of certainties to ponder in its wake.

One, Netflix’s business model has upended the old way of doing business, and there is absolutely no going back. And two, everyone knows the streaming giant is going to try again — and keep trying — until it snags that coveted Best Picture award, which has never been won by a streaming outlet before.

Thus, we’re going to keep seeing Netflix woo directors like Hancock with a tantalizing enticement — we can guarantee you access to an audience the size of which will make your head spin. And your content will be available to all of them with just a couple of taps on a phone screen.

Will The Highwaymen be what finally lands Netflix that Oscar it’s after? Probably not, but this is all part of a masterplan. The streamer is positioning itself as a friendly creative (and deep-pocketed) home for filmmakers like Hancock, and the more projects like this one it lands, the more projects will no doubt keep coming its way.

Which is also not to say The Highwaymen is not an enjoyable two-hour cinematic experience. It is, and it’s also one of those films that slowly leads up to The Moment. The one you know that’s coming — in this case, the shootout that ends up with Bonnie and Clyde shuffling off their mortal coils. In Hancock’s telling, things get rolling when Texas Governor Miriam ‘Ma’ Ferguson, played by Kathy Bates, taps former Texas Ranger Frank Hamer (played by Costner) to come out of retirement. He in turn recruits fellow former Ranger Maney Gault (played by Harrelson), and it’s not long before the game is afoot.

Spoiler alert: We also don’t actually “see” Bonnie and Clyde in the film — except for some far-off snatches of them, or instances where they’re shadowed and obscured — until around the last 15 minutes or so. Which was on purpose.

“I wanted to really stylize (the movie) and shoot it almost in a graphic novel type of way,” Hancock explained. “I wanted the colors to be poppy. I wanted the frames to be interesting and stylish and sexy. The cars to be shiny, everything about it to kind of build up the myth around Bonnie and Clyde.

“To me what the movie about is the long, brutal, soul-wrenching journey of two men who have a terrible gift, and that gift is that they’re blood hunters. And no one can understand the toll that takes on one’s soul. It’s a long journey, and they know how it’s going to end — and it ends exactly as they predict.”

Netflix, Hancock went on to offer, “has been great,” delivering on everything they promised for the film.

“They’ve been wonderful partners in this,” he said. “They really wanted to make the movie. We’d been trying to get it made, and they stepped up. So that’s first and foremost.

“Second, I love the idea that it’s going to both play in theaters as well as dropping on Netflix. Because, ultimately, when you spend 13 years of your life trying to get something made and working to get it made and directing it and waking up at 4:30 in the morning and working so hard — you want people to see it! This is an opportunity for lots and lots of people to see the movie, and it’s very gratifying.”