Here in my neck of the woods — the South — we got our first snow flurries this week. You know you’ve officially entered old man territory when you find yourself grumbling that it’s too early for this wintry stuff — a sentiment helped along by the fact that we’ve had an atypically warm fall in some areas this year. Which can make the arrival of the first snow flakes of the year an unwelcome arrival, indeed.

As the good folks over at Fast Company note, whether you saw a few flurries in recent days or if your area got pummeled by its first winter blast, there’s actually a way to check to see if the snow is indeed coming earlier than usual.

The National Oceanic and Atmospheric Administration’s National Centers for Environmental Information has put together this handy interactive map that draws on historical climate data. The basic idea is that you can zoom in on your area, and this map will tell you the earliest date that there was at least a 50 percent chance of you seeing at least one inch of snow. 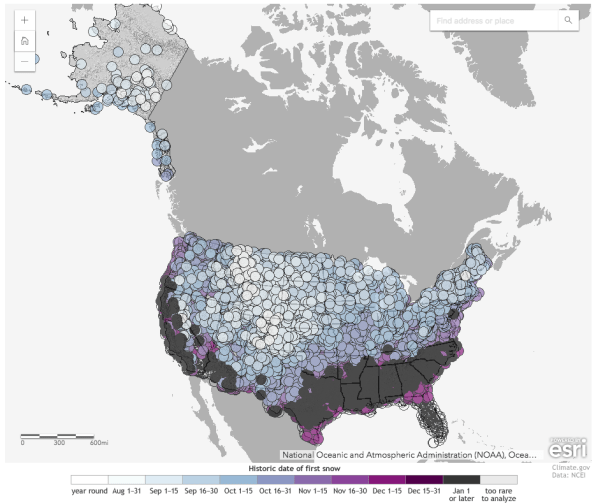 You can check out the full site here for a deeper look at the data. According to the team behind it, it’s based on historical patterns from 1981 to 2010.

Per the site: “A quick look at the map reveals the obvious: the main factors that govern the average day of your first snow are the same main factors that govern your other major climate characteristics: latitude and altitude. In general, the farther north you are, and the farther up you are, the earlier the threat of first snow. In fact, the highest elevation stations along the spines of the Rockies have a year-round threat of snow. On the other end of the spectrum, the Deep South, Gulf Coast, Desert Southwest and Hawaii have many stations that get snow so infrequently, there’s no date listed (empty circles). In these places, there just aren’t enough events to make robust statistics.”

As you might guess, the site goes on to note, the day of a particular area’s first snowfall is not constant, by any means. “It varies naturally, like many other climate variables.”