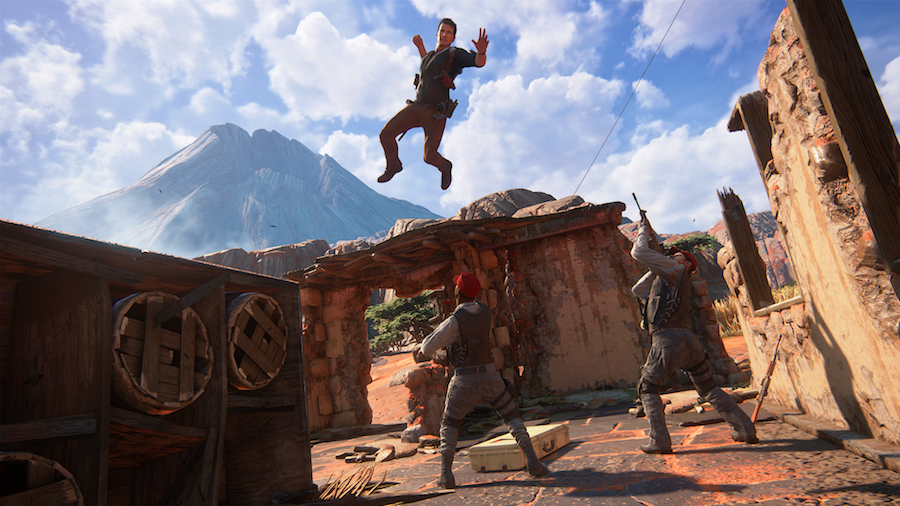 After suffering through a couple of painstaking delays over the past several months, gamers are finally going to get their hands on Uncharted 4: A Thief’s End in May. If you’re a fan of the series, you might be wondering why it took Naughty Dog so long to get this sequel out the door, but after having spent a few hours with Uncharted 4 last week, I can assure you that it’s going to be worth the wait.

DON’T MISS: ‘No Man’s Sky’ is the ultimate role-playing game

During a preview event last week, I had a chance to play through a section of Uncharted 4 that Naughty Dog hadn’t previously shown off. Aside from being just as gorgeous as any other segment of the game, it also illustrated how much work has been done to push the franchise forward on the PS4.

Naughty Dog’s Josh Scherr, a writer on the series, told me shortly before the demo that player agency was perhaps the biggest change since Uncharted 3.

Although Naughty Dog still wants to guide players through a story while controlling the pace of the action, they also want to give players the ability to forge their own paths by creating more expansive environments to explore. What better way to demonstrate that than by dropping Nate, Sully and Sam into the middle of Madagascar with nothing but a 4×4, some guns and a wench?

For the first time in series history, players will be able to operate a vehicle (one that Naughty Dog absolutely can’t call a Jeep, but definitely looks a lot like a Jeep). Cruising along at 30 miles per hour might sound antithetical to the spirit of Uncharted, but by creating environmental puzzles that can only be solved with the 4×4, Naughty Dog has made it feel like just another tool in Drake’s repertoire.

Plus, you can run people over with it.

After winding my way through the muddy plains of Madagascar, occasionally stopping to clamber over some ruins in search of treasure, I crested a hill only to find a tower littered with enemies. At this point, I had several options.

Do I drive in, guns blazing? I had Sully and Sam to back me up, so with all three of us firing away, we might catch the patrol somewhat unawares.

Do I utilize the improved stealth system and sneak around the side, taking out as many baddies as possible before a real firefight breaks out? Along with the upgraded graphics and the focus on player choice, Naughty Dog has also completely revitalized the stealth system, turning Drake into a decent Solid Snake impersonator.

Here’s an extended look at the section I played through:

I decided to go the sneaky route, hiding in the tall grass as lookouts peered out from their posts. As soon as the coast was clear, I ran to a nearby post, hopped up on the side of the the building and waited for the guard to approach so I could toss him over the ledge. Unfortunately, he was moving a little too slowly for my tastes, so I hopped up and knocked him out instead.

At this point, I probably could have continued to tiptoe my way around the tower, picking off the opposing forces while trying not to alert anyone, but the guard I incapacitated happened to have a sniper rifle. So I started firing.

In my personal opinion, combat has never been the highlight of the Uncharted series, but it too has been revamped for the PS4. I was able to pop off a few shots with the rifle before tossing my grappling hook out to swing to another ledge, landing on top of an enemy, rolling away and continue firing with my pistol.

From there, I went straight into close quarters combat, running fist-first into the tower and trading blows with anyone I could find. Punching, countering, pulling out a weapon to fire at a distant enemy — it was all relatively seamless.

After a few minutes, the three of us had finally cleared the tower. We jumped back into the 4×4, fired up the engine and continued on our way to the massive mountain in the distance. It was at this point that I ran into one of the more clever puzzles utilizing the vehicle, when a bridge suddenly collapsed under its weight.

With half the bridge on the ground and the other half still aloft, I had to tie the wench at the front of the vehicle around the beams holding the bridge up and drive backwards, ripping the other half down to create a makeshift ramp.

It was at this point that someone else needed to take my place at the demo station. Admittedly, I didn’t expect an Uncharted 4 demo to end with me desperately wanting to explore for just a few minutes longer, but that’s what happened.

Uncharted 4 is still as much an Uncharted game as any of its predecessors, but by lifting appropriate elements from The Last of Us and taking the necessary time to rework the systems that needed reworking, Josh Scherr and the team have brought the series up to speed while providing fans with a worthwhile send-off.

Uncharted 4: A Thief’s End will release for PS4 on May 10th.