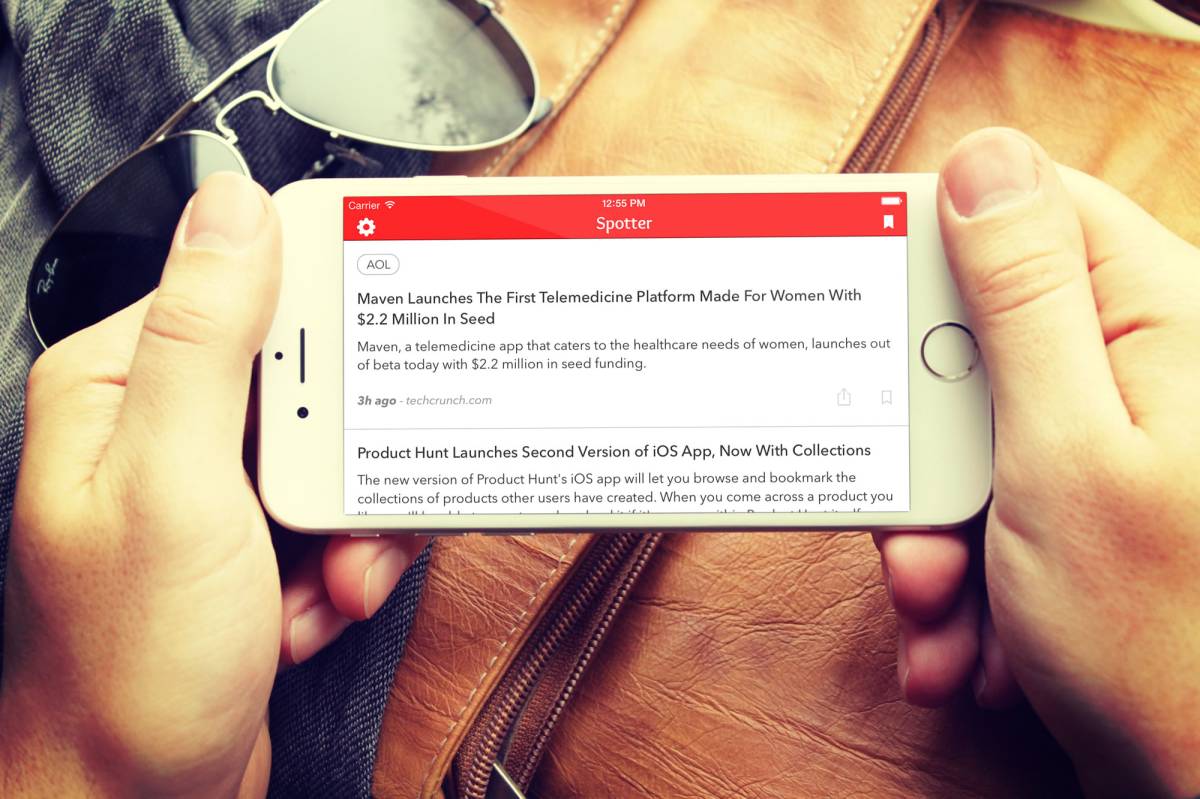 A pair of ex-Googlers is bringing another player to the news app space today with their launch of Spotter, an app that crawls hundreds of news sites to try to bring users information that matters to them and could help their careers.

The app, which launches first for the iPhone and iPad, and is headed to the Web and Android soon, was developed by Jon Emerson and Tom Charytoniuk, both of whom worked on various aspects of the Google+ experience, among other things, while they were with the search giant.

They built Spotter, they explained, on the premise that the most relevant articles to a user can come from anywhere – from Medium posts to The New York Times and everything in between. And rather than jump into different streams or manually pick content creators to follow, their goal is for Spotter itself to do the heavy lifting of picking and choosing.

Charytoniuk says he was confronted with the need for such an app himself after leaving Google and spending last year leading the development of a full suite of mobile apps for Seattle-based real estate brokerage Redfin. While at Redfin, a manager once asked him to stay on top of competitors and their mobile launches. It felt like a tall order, he said, since he didn’t have the amount of time he wanted to scour blogs and immerse himself in news.

Emerson, meanwhile, had quit Google in October – inspired, he says, to create something new and also convinced that sites that publish dozens of articles a day (“fun reads, but they got in the way of me knowing the actual events of the day”) meant that there was a need for someone to build a robust news app.

Charytoniuk quit Redfin in January. Former MySpace CTO Dmitry Shapiro introduced him to Emerson, and together the pair started working long days out of Emerson’s house in San Francisco on what would become Spotter.

Advisors working with the Spotter team include Secret co-founder Chrys Bader, and Emerson and Charytoniuk have been working on the project full-time since January. Emerson describes the app as behaving a little like the engine that drives what users see in their Facebook news feeds. Except, with Spotter, users see relevant news instead of posts from their friends.

“We were convinced we had the machine learning and artificial intelligence skills to do news ranking leaps and bounds better than competitors,” said Emerson, whose work with Google+ included a focus on the social network’s stream and later creating the Google+ Polls feature.

“We quickly discovered the important attributes of news ranking: Topical relevance, important companies in the space, important people, people you know, whether an article is an event announcement or commentary, and, of course, Twitter and Facebook share trajectory.  We proceeded to ask all of our friends for a list of all the most important news from their pasts.  We collected thousands of articles.  And then we built Spotter so it can predict the most important articles for people with greater than 90 percent accuracy.”

Speaking of social sharing, the Spotter team came to the conclusion that an article’s path around Facebook and Twitter is a “counterintuitive input” into their ranking system. To smooth out the bigger increase in shares and likes that things like celebrity news articles get compared to business news articles that can still perform well, the Spotter team’s algorithm tries to balance social relevance with professional relevance.

Emerson adds that the app’s focus is broader than just technology news. Most of the friends of the Spotter team, for example, don’t work in technology, he points out, so the team tried to make sure it can be relevant to every industry.

Among other features, Spotter uses topic modeling algorithms to classify articles into industries, natural language processing to identify companies and people in articles and “a big neural network” that pulls everything together in user streams.

If it sounds a little like Flipboard territory, Emerson concedes that Flipboard – the app that lets users plug in their social networks and follow topics as well as curators and news sources, among other things – is indeed a competitor. But he thinks that products like Newsle, SmartNews and News360 are closer in position and technology.

“One differentiation I feel we have over virtually all competitors is that we don’t have topic streams,” Emerson says. “You don’t opt-in to topics on Spotter and receive all news articles that happen to hit that topic. Instead, you have interests, and every time you use your app, we compare thousands of articles against your interests and choose the best ones.  If an article matches multiple interests and mentions people you know, it will rank very highly.  In this way, we’re a lot like Facebook’s news feed ranking algorithm, but instead of posts from your friends, we show you news.”

Updated a statement surrounding Emerson’s motivation for creating the app.