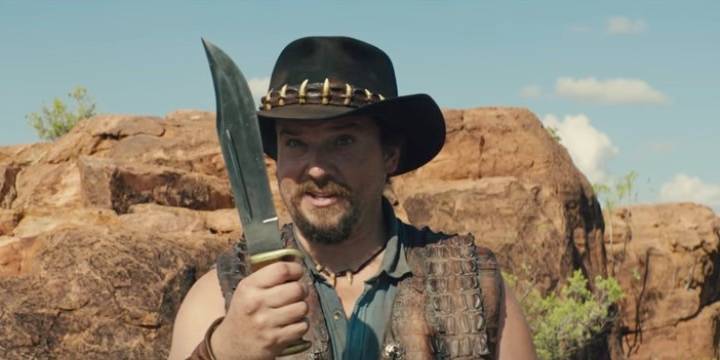 We’ve seen fake trailers for a Dundee: The Son of a Legend Returns Home movie for a couple of weeks now. At first, I wasn’t exactly sold on the idea that we needed a new Dundee flick, but as time went by, I started thinking that, considering the cast behind it, a new movie might not be the worst possible idea.

Then the Super Bowl happened, and we were finally told that the whole trick was actually an elaborate marketing stunt meant to promote tourism in Australia.

In addition to Danny McBride, who plays the sun of Crocodile Dundee, we have plenty of stars in this commercial including Paul Hogan — who played Dundee — but also Russell Crowe, Chris and Liam Hemsworth, Margot Robbie, Isla Fisher, Ruby Rose, Hugh Jackman, and Luke Bracey in the ad.

The TV spot is meant to create “film-induced tourism” without a film, The Hollywood Reporter says.

The idea for a Dundee reboot “seemed silly enough that it’s something that Hollywood would do, and in this day and age, to get people’s attention by doing a fake movie trailer for a fake franchise seemed like a great idea,” McBride said in an interview.

The campaign is a two-year effort that costs $27 million, but that’s just a drop in the bucket compared to the $3.7 billion US tourism brings to the Australian economy every year. The goal of the campaign is to push that number to $6 billion by 2020.
Interestingly, all the Australian actors who participated in the ad took no money. Hogan, who owns the rights to Dundee, licensed the property and took part in the ads for free as well.

So why Dundee? Well, it appears that the original movie and the sequel caused major spikes in US tourism to Australia.

The ads will continue over the next two years, with 150 pieces of content supposed to go live, starring McBride and other Australian celebrities. Here are all the clips released so far, including the Super Bowl ad.