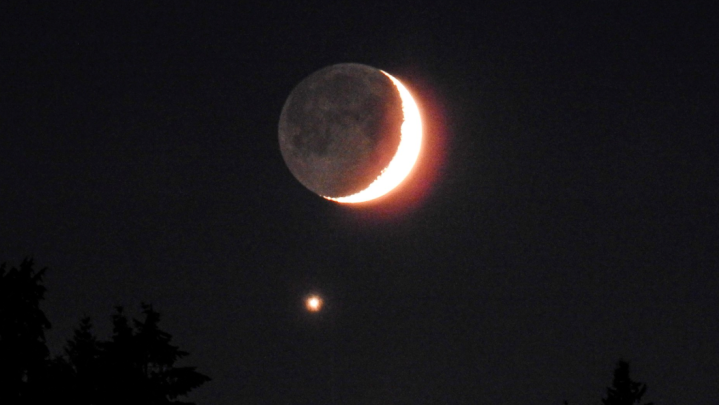 If you’re staring at the sky on a clear night it’s usually pretty easy to spot the Moon, but we often forget that it’s sometimes possible to see entire other planets with our naked eyes as well. Last night was a great reminder of that, as Venus was positioned perfectly for telescope-free viewing, and everyone seemed to eat it up.

Since the planets in the Solar System don’t orbit the Sun in sync with one another, we’re only treated to sights like this every so often. Even on the rare occasion that we can see another planet like Venus without any extra equipment it often only lasts a short while, but that doesn’t make it any less breathtaking.

As you might expect from such a spectacular skywatching event, plenty of people turned their camera lenses to the heavens to capture Venus photobombing Earth’s natural satellite. Lots of those people also shared their photos on Twitter:

Not sure if the pic came out good but goddamn the sky looks beautiful tonight. pic.twitter.com/bG9r1iJLDh

A beautiful crescent Moon appears 2° to the right of a brilliant Venus just 45 minutes after sunset tonight. https://t.co/4KxCEBmfsB pic.twitter.com/MTH7cqsDWs

Of course, Venus isn’t the only planet that regularly makes an appearance in our night sky. We’re just days away from Mars showing its shining face to skywatchers here on Earth, and while it won’t be quite as obvious as Venus you’ll still be able to see it without a telescope. July 27th will be the big day, and you should be able to spot the Red Planet as it dances near the Moon in the southern sky.

Venus certainly put on one heck of a show, so it’ll be hard to top, but you should still take the opportunity to check it out if you get the chance. Scientists estimate that we won’t have a better view of the Red Planet until around 2035, so it’ll be a rare treat to say the least.

It’s nice to be able to relive moments like these thanks to technology — and everyone having a smartphone in their pocket at all times — but nothing can really compare to seeing it in person.