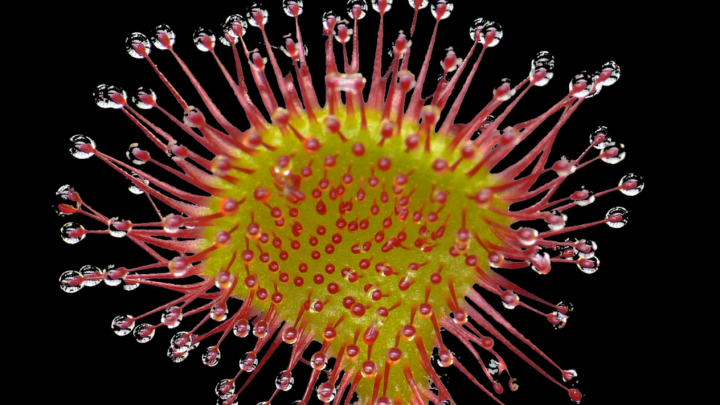 Nobody likes a mooch. If you’ve ever had a friend who makes a habit or rummaging around in your fridge the moment they walk into your place you know exactly what I’m talking about, but apparently the frustration of being taken advantage of isn’t uniquely human, and a species of carnivorous plant has now been caught stealing insects from its fellow flora.

The plants, which are species of sundew that grow in Japan, are covered in sensitive, dew-tipped stalks that wrap up bugs that get too close for comfort. The plant then absorbs the dead insect slowly, as many meat-eating plants do, as it awaits its next meal. Now, for the first time ever, scientists have observed the hungry plants eating insects that were lured in by a neighboring plant in bloom, suggesting a sort of one-way relationship whereby the carnivorous plant steals insects from non-carnivorous plants who rely on insects for pollination.

The study, which was published in Ecological Research, closely studied the feeding habits of the sundew plants in order to determine how they get their meals. What they found was that plants which were situated near others which were in bloom tended to have a much heartier diet thanks to the spike in insect activity around the flowers.

Obviously, the sundew plants don’t reach out and grab the insects, and as always they rely solely on bugs being dumb enough to land in its sticky stalks, but it’s a clear benefit for them to grow in proximity to flowering plants. Those nutrients give the sundew a much needed boost and, because the plants can produce their own seeds from pollen rather than relying on insects for cross-pollination, their mooching behavior has no negative repercussions for the meat-eating plant.

Of course, it behoves the sundews to allow neighboring plants to continue to reproduce, as the increased insect activity from their flowers is essentially a free meal ticket. In that way, the passive nature of the sundew’s “hunting” technique assures that it doesn’t fully wipe out a local population of important insects.