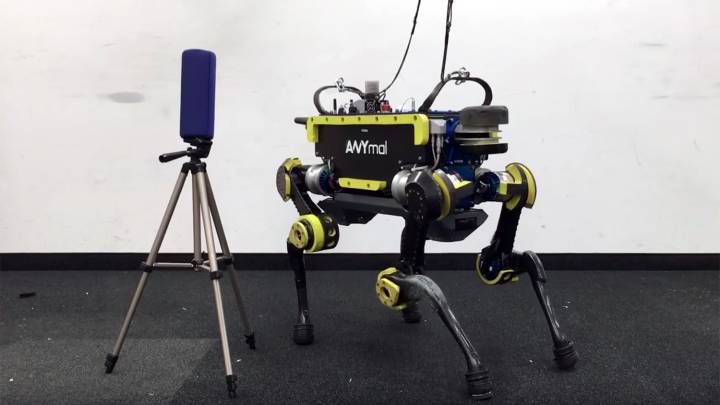 Robotics and AI are two off the hottest segments of tech right now, so it stands to reason that there are plenty of companies out there doing their best to combine them. When they do, however, the results keep getting more and more creepy. We recently saw a pair of videos from Boston Dynamics, one that featured a robot dog opening a door for another robot dog, and a second where the robot dog tries to open a door while a human physically abuses it. Yes, this will be the video we all look back to when the robot uprising finally arrives.

Robot beating aside, the robot dog featured in these clips it haunting in its creepiness. And as it turns out, Boston Dynamics isn’t the only company building creepy new AI robots.

A company called ANYmal Research has been developing the ANYmal Robot for quite some time now. Here’s how the robot is described on the company’s website:

ANYmal is a quadrupedal robot designed for autonomous operation in challenging environments. Driven by special compliant and precisely torque controllable actuators, the system is capable of dynamic running and high-mobile climbing. Thanks to incorporated laser sensors and cameras, the robot can perceive its environment, accurately localize, and autonomously plan its navigation path and carefully select footholds while walking. ANYmal carries batteries for more than 2 h autonomy and can carry up to 5-10 kg additional payload. With a weight of less than 30 kg, ANYmal can be easily transported and deployed by a single operator. ANYmal is designed for real-world usage and is water- & dust-proof (IP67) and impact robust.

Yes, it sounds pretty awesome. But the ANYmal has reached a new phase in its development, and it’s apparently the phase where this quadrupedal robot needs to learn how to dance autonomously.

“ANYmal carries an onboard microphone with which music can be perceived,” the company explained in the description of its new video on YouTube. “The beat of the music is analyzed and a suitable sequence of dance motions is choreographed. The desired and real motion trajectories are compared such that the delay between music and motion can be minimized.”

The tech that we’re seeing demoed in this video is obviously very interesting, but that doesn’t make it any less haunting. You’ll find the full video embedded below.