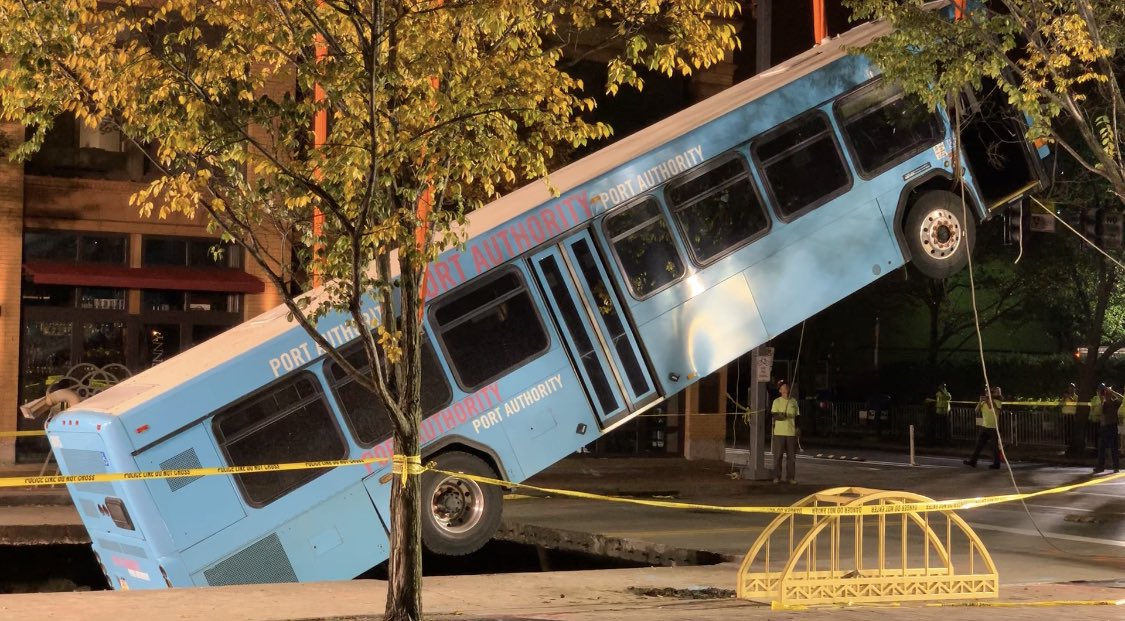 You never know what life is going to throw at you, and that’s especially true on Mondays. Pittsburgh residents taking advantage of convenient public transportation were reminded of that fact this week when the bus they were riding on was swallowed up by a city street.

The incident, which occurred in the city’s downtown area, saw a city bus fall rear-first into a cavernous void that materialized in the middle of the road. It happened during the morning rush hour, of course, because that’s exactly what everyone needed to start their week off on the right foot.

The incident forced the road to be closed since, well, there wasn’t really any road there anymore, and a pair of cranes were called in to yank the bus from the newly-formed pit. City officials revealed that only two people were aboard the bus at the time it fell into the hole, and a 56-year-old woman was treated for unspecified injuries at a local hospital and quickly released.

And it’s out! Just before 10 p.m. Allegheny Crane & Rigging successfully removed the @PGHtransit bus from Tenth St. at Penn Avenue. Please still avoid the area while work is being completed. pic.twitter.com/pWIEdulzF8

Getting the bus free from its predicament proved to be challenging. When the sinkhole formed and the street collapsed, the bus came to rest on power lines and communications cables which were buried below. It’s unclear at this point if any serious damage was done to the cables but city officials will be addressing that soon.

Pittsburgh’s official twitter account tweeted out a video showing crews using the cranes to remove the bus, giving us a really good idea of how huge the hole really was. Check this out:

Thanks to the public for your patience. Please stay clear of the area for the foreseeable future. pic.twitter.com/W13QOQNh4r

That’s a very, very big hole. Sinkholes often form when water flowing under the ground carries away too much of the material that was supporting everything above it. They are also sometimes created accidentally by human activity, such as the massive hole that appeared in Guatemala City as a result of burst sewer pipes.