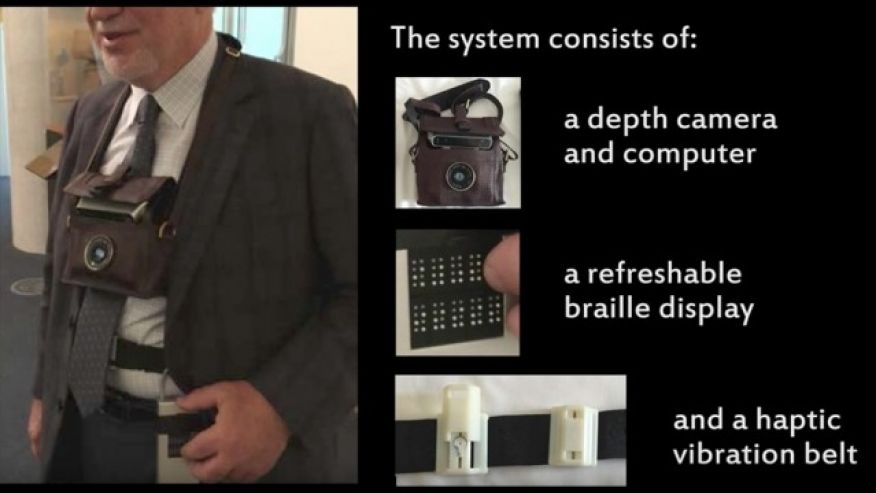 The iconic white cane has helped provide empowerment and mobility for generations of visually impaired people and has now received a high-tech update courtesy of researchers at MIT.

While the cane continues to serve as a primary tool for the vision impaired, part of the reason for working to upgrade the cane, according to MIT, is because it has its limitations. For example, the cane sometimes comes in contact with other people, and it can’t identify more specific types of objects, such as different kinds of furniture. Moreover, the cane can’t determine whether or not a chair is occupied.

The apparatus itself requires several steps to be worn and used properly. For starters, the user wears the 3-D camera in a pouch around their neck and a processing unit running the team’s proprietary algorithms. The system also contains a sensor belt, with five vibrating motors evenly spaced around its forward half, and a reconfigurable Braille interface, worn at the user’s side, according to MIT.

In an email, Professor Daniela Rus, director of MIT CSAIL, told Fox News that the technology’s primary goal is to get users from Point A to Point B. “The question we pose is, what if these systems could also help them experience the world around them? And this is where computers and sensors can augment the feedback obtained from a white cane,” she wrote.

One crucial component is an algorithm that identifies surfaces and their orientations using data from the 3D camera. The algorithm groups pixels containing associated location data into clusters of three. Each cluster then determines a plane. If the orientations of the planes defined by five nearby clusters are within 10 degrees of each other, the system concludes that it has found a surface.

However, the system doesn’t need to determine the extent of the surface or what type of object it might be; it instead registers an obstacle, and the motor begins to buzz if the wearer gets too close to it, according to MIT.

Although users of the system found it to be intuitive and appeared to be more empowered, the researchers insist that this upgrade is not intended to oust the white cane.

“We wanted to primarily complement the white cane to allow users with visual impairments to quickly assess their environment in a contactless manner,” wrote Robert Katzschmann, a graduate student in mechanical engineering at MIT, in an email to Fox News. “And enable them to find objects of interest without having to ask for assistance and without having to touch on people in their way.”