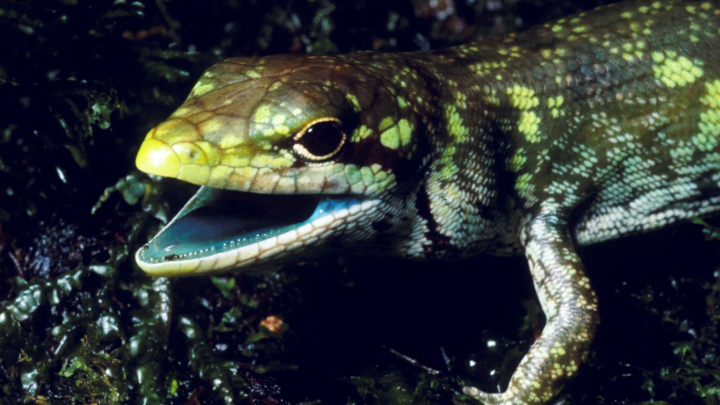 In science fiction, green blood is common. Monsters often have green blood because it’s strange and scary, the Xenomorphs from the Alien franchise have acidic green blood, and the Predator films introduced us to glowing green blood. Green blood does actually exist here on Earth, but it’s quite rare, and a new research effort aimed to determine why certain species of lizard on the island of New Guinea have the bizarre shade of blood was only able to half-answer the question.

The research, which was published in Science Advances, focused on tracing the origin of green-blooded Prasinohaema skinks and figuring out what made them different from their red-blood brethren. The scientists quickly discovered just how unique these creatures really are.

Upon studying the blood of the lizards, the researchers were able to determine that a green bile pigment called biliverdin is responsible for the odd color. Biliverdin is present in humans, but only in small amounts, and is responsible for the greenish hue we sometimes see around bruises. Too much biliverdin in human blood and tissue can cause jaundice, a condition characterized by yellow skin faulty liver function, but some of the lizards in New Guinea are absolutely packed with the stuff.

“In addition to having the highest concentration of biliverdin recorded for any animal, these lizards have somehow evolved a resistance to bile pigment toxicity,” Zachary Rodriguez, a doctoral candidate at LSU and lead author of the study, explains. “Understanding the underlying physiological changes that have allowed these lizards to remain jaundice-free may translate to non-traditional approaches to specific health problems.”

The amount of biliverdin present in the skinks would kill a human many times over, and the researchers estimate that the levels of the green bile in their bodies are up to 40 times the lethal dose for a human. But exactly why the lizards have evolved the unique blood has remained a tough question to answer.

Going forward, the scientists will attempt to finally answer the “why,” and they’re going to start by examining how the blood reacts to various parasites common in the area. It could be that the special blood is resistant to certain parasitic infections, giving the lizards a clear survival advantage, but we won’t know for sure until the additional work has been completed.