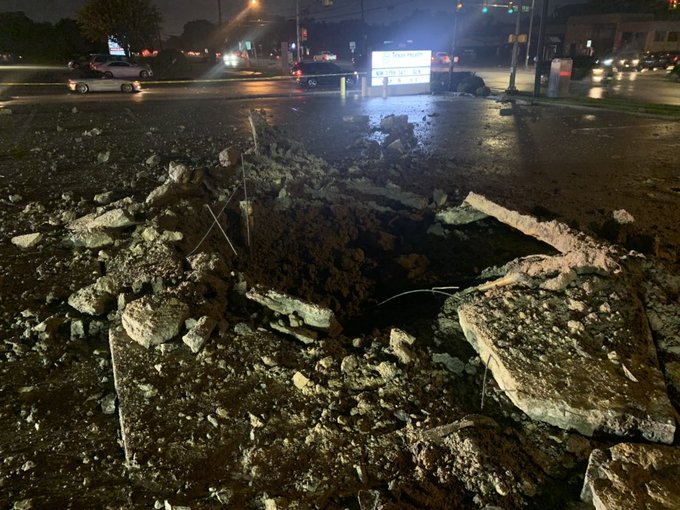 When severe thunderstorms roll through your neck of the woods one of the biggest concerns is always the risk of a tornado. A swirling vortex of high-speed wind and debris can cause incredible damage, but as residents of Fort Worth, Texas, were recently reminded, lightning can wreak havoc, too.

A ridiculously powerful bolt of lightning zapped the parking lot of a Chevron gas station early on Wednesday morning, blowing a 15-foot hole into the thick concrete and sending debris flying. As police quickly found out, the blast, which was caught on a nearby security camera, could have been much, much worse.

The lightning struck the ground in one of the worst possible spots. It blew a hole right through the six-inch-thick concrete that covers a massive diesel tank. Pieces of concrete flew as far as 75 feet according to local news reports, but it was the exposed tank that caused the most concern.

Officials were quick to respond to the scene and determined that despite the damage, no active leaks had formed. That’s a seriously lucky break, but it’s even more fortunate that the lightning struck the ground above the tank holding diesel fuel instead of the nearby tanks holding gasoline.

15×15 hole in parking lot cause by lightning strike this morning. Crews have stabilized the incident. No injuries. #FWFDLightningStrike Boat Club and Shadydelll. pic.twitter.com/0bheQH8yu5

“Primarily, their diesel tank was affected, which was actually a good thing. Diesel’s less explosive when it comes to that kind of thing. It’s flammable, but the vapers are not quite as explosive as gasoline,” Mike Drivdahl of the Fort Worth Fire Department told NBCDFW. “I think we’re very lucky that nobody was in the parking lot at the time, because there could have been some injuries for sure.”

Thankfully there were no injuries, and the tank itself held up against the intensity of the lightning strike. The gaping hole in the gas station’s parking lot will obviously need to be tended to, but that’s a relatively minor inconvenience in the grand scheme of things.