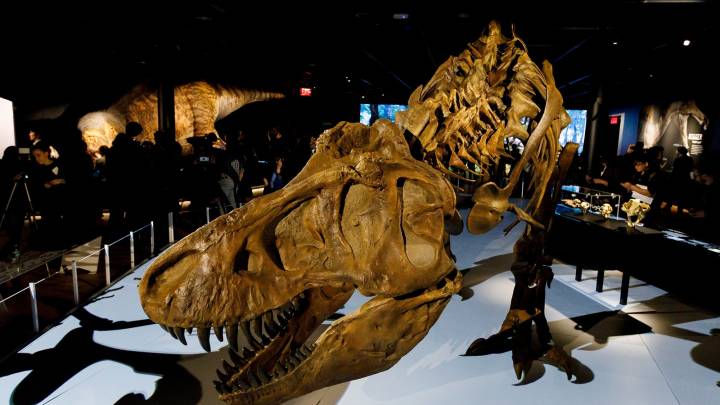 The Tyrannosaurus rex is one of the most recognizable dinosaurs of all time. It’s played both hero and villain many times in pop culture, and it’s almost universally portrayed as a hulking brute of unimaginable power. The jury is still out on whether the massive ancient creature was primarily a predator or scavenger, but we’re still learning more about the species, including how large it was capable of growing.

A T. rex specimen found in Canada is helping researchers nail down that last point. It’s the largest rex skeleton ever discovered, and it’s estimated that the animal that left the fossils behind weighed in at an extraordinary 19,500 pounds.

As National Geographic reports, the skeleton is approximately 65% complete, giving paleontologists a good idea of the overall size of the animal when it was alive. The specimen, which has been nicknamed “Scotty,” is believed to have lived to the ripe old age of 28, or perhaps a bit older. That sounds pretty young to us, but in T. rex terms that’s a long, long life.

The creature, which the researchers describe as “extremely large” and “robust,” is the largest T. rex ever discovered, but it wasn’t a particularly new find. Scotty was originally uncovered way back in 1991, but its bones were so embedded in the hard rock that it has taken over a decade and a half for scientists to piece it together into a larger form that could be studied.

Scotty lived roughly 68 million years ago when Earth was quite a bit different than it is today. Its incredible size would have made the animal an intimidating sight, but it might not have used its raw power to actively hunt prey. There’s plenty of debate in scientific circles regarding how the T. rex species lived, and it’s possible that massive beasts like Scotty were more comfortable sampling dead carcasses than running down or ambushing their own meals.