NASA’s Perseverance rover is currently celebrating its 100th day of work on the surface of Mars, but it’s not the only vehicle that hit the milestone. The Ingenuity helicopter, which rode to Mars on the belly of the larger rover, has also been on the Red Planet for 100 martian days. The two machines are doing some great work, but a recent photo captured by Ingenuity and posted by NASA’s Jet Propulsion Laboratory gave NASA fans a real (fake) scare.

As CNET points out, an exchange between the Jet Propulsion Laboratory’s Twitter account and a fan addressed a strange object that appeared to be lurking in the distance. It appeared to be a large metal sphere hovering just out of the frame of the photo, and unless you’re a NASA scientist you probably wouldn’t have been able to guess what it was. It bears a pretty significant resemblance to one of the most feared fictional spacecraft ever to grace the silver screen: The Death Star.

So, let’s take a look at the image. The object is clearly round in shape, at least as far as we can see. It has a curved shadow and the top is much brighter, suggesting it’s made of some kind of metal. Yep, that’s the Death Star for sure.

Postcards from a Martian helicopter. 💌
All of the raw images straight from the #MarsHelicopter’s two cameras are available for your viewing and downloading pleasure here: https://t.co/iZvwEzOSgh pic.twitter.com/ibWQhKPwrn

No, but seriously, the orb is obviously not affected by the hazy horizon in the photo so that means it’s much closer to the camera than anything else in the shot. As NASA reveals in a reply on Twitter, it turns out that the feared destroyer of planets is actually just a close-up shot of the edge of Ingenuity’s foot.

No Death Star there. It's actually Ingenuity's foot.

As much as we’d like to believe that there’s something on or around Mars that can fire ultra-powerful lasers, it looks like NASA is telling the truth here. In images from earlier in the mission, we can see Ingenuity’s feet and, sure enough, they’re rounded on the ends and underneath. The angle of the photograph makes it appear as a half-sphere, but if we could see more of it we’d see the leg extending upward to the body of the aircraft. 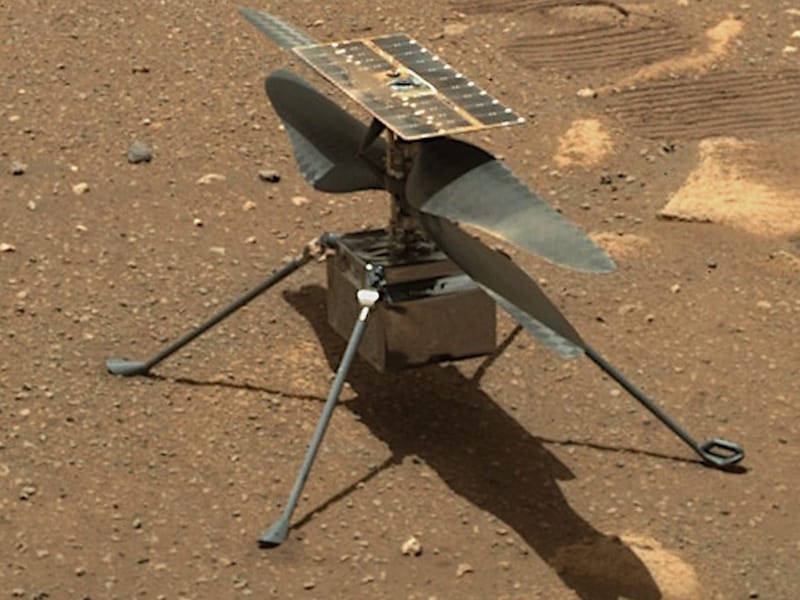 The Ingenuity chopper has already done some really fantastic work, conducting a number of impressive test flights and pushing its hardware to the limit. The early flights were simple up-and-down affairs but it wasn’t long before NASA began asking Ingenuity to fly at high speeds horizontally, and eventually had it relocate to a new area so that its buddy Perseverance can continue to record video of its flights.

It proved that using an aircraft for observation on Mars is not only possible but potentially even easy. NASA could use the information it gathered from Ingenuity and bake it into a future mission using an aerial drone to explore huge areas of Mars at a much faster pace than a rover can move.