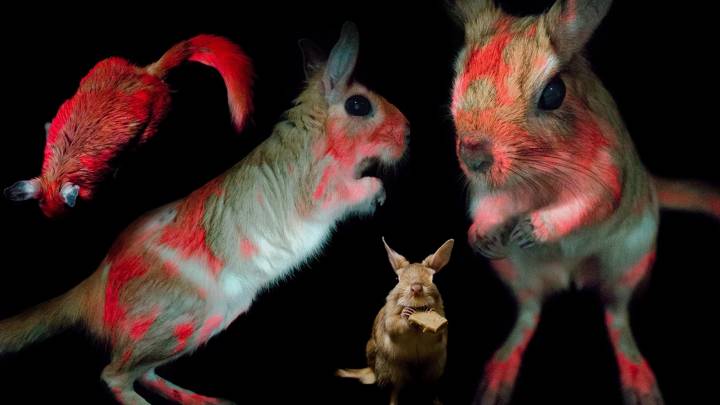 One of the more peculiar and rarest traits in the animal kingdom is the ability to glow in the dark. Some animals, including deep-sea fish and fireflies, are able to produce light in the visible spectrum. This is called bioluminescence, and it’s quite rare, but there’s another type of luminescence that some animals possess which we can’t see with our naked eyes. It’s called biofluorescence, and it’s the ability of an animal to glow under specific light conditions, like UV light.

Again, some fish are known to have this ability, as well as certain reptiles and even birds. A very select few mammals also have this trait, and researchers just discovered a new one. Springhares, which are rodents that resemble tiny kangaroos in their locomotion and stance, light up light a Christmas tree when hit with UV light, and scientists still aren’t sure why.

In most cases of bioluminescence, the reason for the evolutionary adaptation is clear. Deep-sea fish can use lighted “lures” to draw in prey, while others have bright bellies that, when viewed from below, allow them to blend into the brighter ocean waters above. The reasons for biofluorescence are a bit harder to pin down, and since springhares can glow in several shades of color including red and orange, as well as bright pink, the benefits remain unknown.

“Here, we document vivid biofluorescence of springhare (Pedetidae) in both museum specimens and captive individuals—the first documented biofluorescence of an Old World placental mammal,” the researchers write. “We explore the variation in biofluorescence across our sample and characterize its physical and chemical properties. The striking visual patterning and intensity of color shift was unique relative to biofluorescence found in other mammals.”

In images captured by the scientists, the fluffy rodents look almost otherworldly. Patches of their fur light up in bright colors with no discernable pattern. However, the fact that the lighted parts of the fur break up the outline of the animal’s body may be a clue as to its usefulness.

“Springhares are predominantly solitary and tend to forage in more open areas with sparse vegetation and, therefore, have greater exposure to predators due to the lack of cover or group vigilance,” the paper reads. “Thus, we hypothesize that the patchiness of biofluorescence in springhares could function as a camouflage of sorts, but this would depend on the UV sensitivity of their predators.”

So, a UV-sensitive predator might be confused by the pattern it sees and struggle to follow or attack the rodents. That would be a very useful trait, and while it remains unproven, it seems like the most likely possibility while we wait for further research to be conducted.