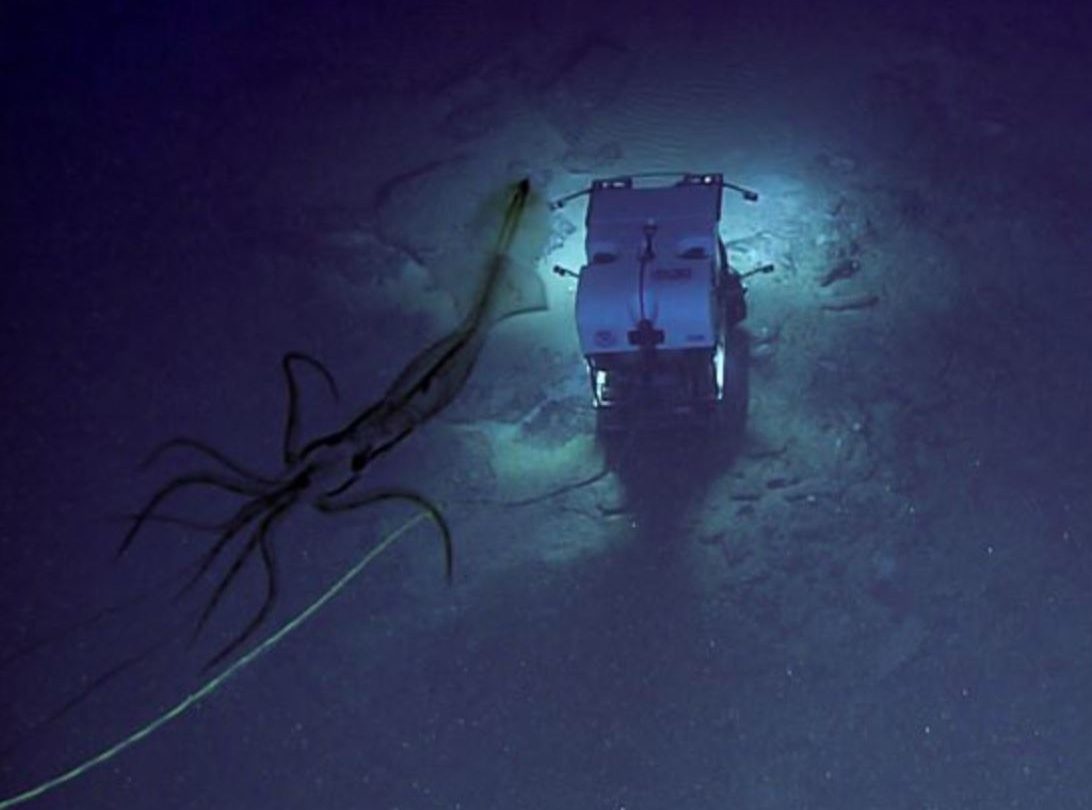 Most of Earth is covered by oceans, and when you’re way up near the surface, the wildlife you spot is usually predictable. Dive down a bit and things start to change, and the deeper you go, the more bizarre the sights. By the time you reach the ocean floor, you might as well have traveled to an alien planet.

We’ve seen plenty of strange things thanks to scientific expeditions conducted by scientists using remotely-operated vehicles that explore the deep. In a recent posting by the NOAA Office of Ocean Exploration and Research, one of those vehicles is seen scouring the seafloor for interesting sights, but it’s the creature lurking behind its back that is particularly interesting, and maybe a little frightening.

As the robot is beaming its bright spotlights onto the seabed, the shadowy outline of a large squid appears at its rear. The squid, which was apparently quite interested in the robot, is likely just as surprised to see the vehicle as the scientists were to see it.

“Check out this lurking deep-sea squid, seen creeping above remotely operated vehicle Deep Discoverer (D2) as the vehicle explores the face of a scarp feature during Windows to the Deep 2019,” the group writes on Facebook. “Ever get the feeling you’re being watched?!”

The photo was captured by a camera rig installed on a separate unit that is tethered to both the remote vehicle and the research vessel sitting up on the surface. It provides additional illumination and offers scientists an external view of the vehicle. In this case, it spotted the spying squid.

Squid, like many cephalopods, are remarkably intelligent. They are skilled hunters and many species of squid are known to be extremely social, working together toward common goals. Curious by nature, the squid here is likely just trying to get a grasp on what it’s seeing, having likely never encountered such a thing before.