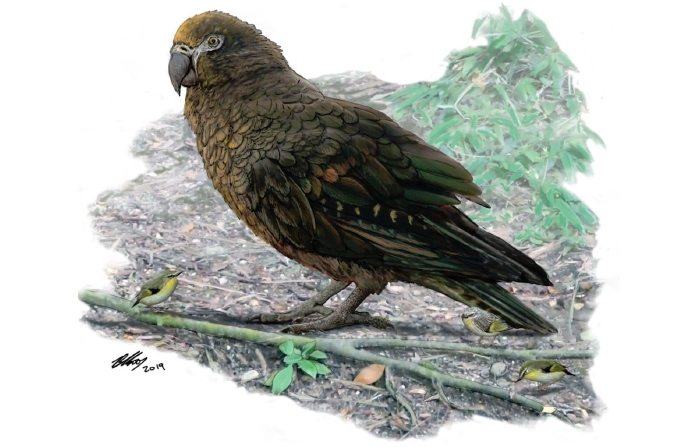 Parrots are popular pets today, and you don’t have to look far on YouTube to find charming videos of tropical birds doing adorable things. They’re fun animals, and their small size makes them appealing to potential owners. Fossils from New Zealand reveal the existence of an ancient parrot that would definitely not have been a good fit for an apartment-dweller… or anyone, for that matter.

The bird, which has been nicknamed “Squakzilla,” was absolutely massive by today’s standards. The creature weighed in at around 15 pounds, which might not sound all that big, but it stood about as tall as a 4-year-old child. Yeah, that’s a big bird.

The bird’s scientific name — Heracles inexpectatus is a nod to how shocked the researchers were when they came across the three-foot-tall parrot. The bird was identified thanks to a pair of leg bones that were found fossilized in ancient clay in St. Bathans, New Zealand, back in 2008. Over a decade later, scientists can finally say for certain that the bird was an entirely unknown species of colossal parrot, which is particularly interesting because most of the other bird fossils in the region are tiny by comparison.

“Most of the specimens in the St Bathans fauna — more than 6,000 identifiable bird bones — are quite small,” Trevor Worthy lead author of the study, told National Geographic.
“It was completely unexpected and quite novel. Once I had convinced myself it was a parrot, then I obviously had to convince the world.”

As incredible as the discovery is, there are still many unanswered questions, especially regarding where the bird fit in the ecosystem 19 million years ago. It’s unlikely that the bird was capable of flying, according to the scientists, but how it lived, what it ate, and whether or not it was a carnivore remain open for speculation.