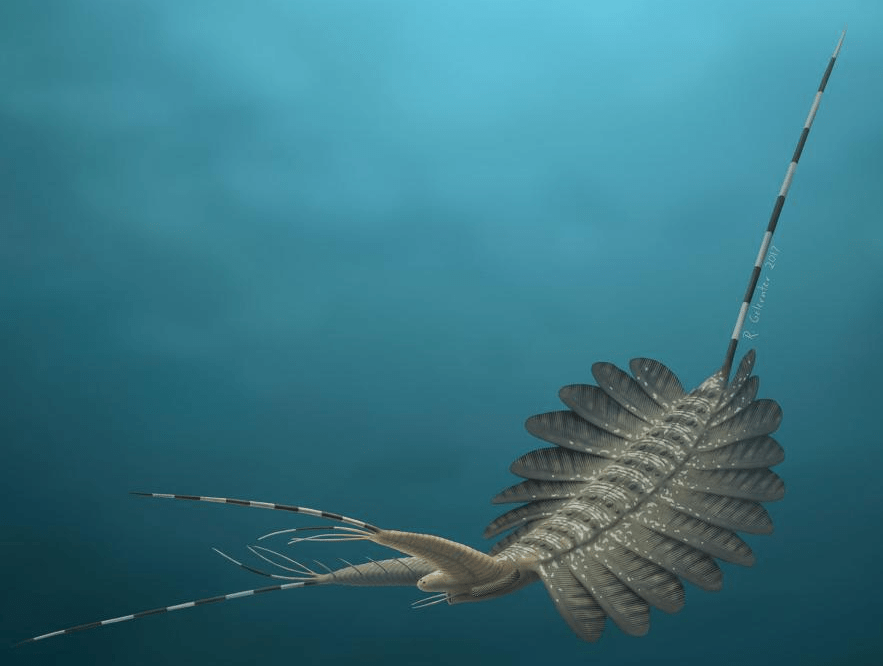 Finding intact fossils of hardened bone and teeth can be difficult on its own, but the real challenge for paleontologists is often locating the ancient remains of soft tissue. For a long time, the only known fossils of the pint-sized aquatic predator Kerygmachela kierkegaardi that existed were highly deteriorated and revealed very little, but a new discovery is changing that in a big way. Over a dozen new fossils of the creature were discovered in Greenland, and they’re so well-preserved that researchers are actually able to peer inside its brain for the first time.

The animal, which hunted small marine organisms, was just shy of a foot long at its largest. It was equipped with large fin-like appendages that allowed it to swim, and it used spiny limbs near its head to attack and grab its prey. This new crop of fossils suggests that it also had a simple brain structure compared to modern-day arthropods, which flies in the face of previous theories.

In today’s arthropods, a one-part brain develops into a three-part structure, but that doesn’t appear to have been the case with the 520-million-year-old Kerygmachela kierkegaardi. Instead, the researchers argue, the creatures utilized a single-segment brain for the entirety of their lives, much like what the scientists believe are used by the tiny micro-animals called Tardigrades.

The research, which was published in Nature Communications, is bold in its declarations, but as National Geographic point outs, not everyone in the scientific community is on board with the findings.

“If they’re going to say that the brain of Kerygmachela is like that of a tardigrade, you have to be really, really careful,” Nicholas Strausfeld of the University of Arizona told the site. “Because it might not be.” His warning is hedged in the fact that very little is known about the brain structure of Tardigrades, and it’s possible they might not even have a one-segment brain at all, but rather a unique nerve structure that works much differently.

Regardless, the research offers a first-ever look inside the ancient arthropod’s head, and provides important insights into the evolution of primitive brains.