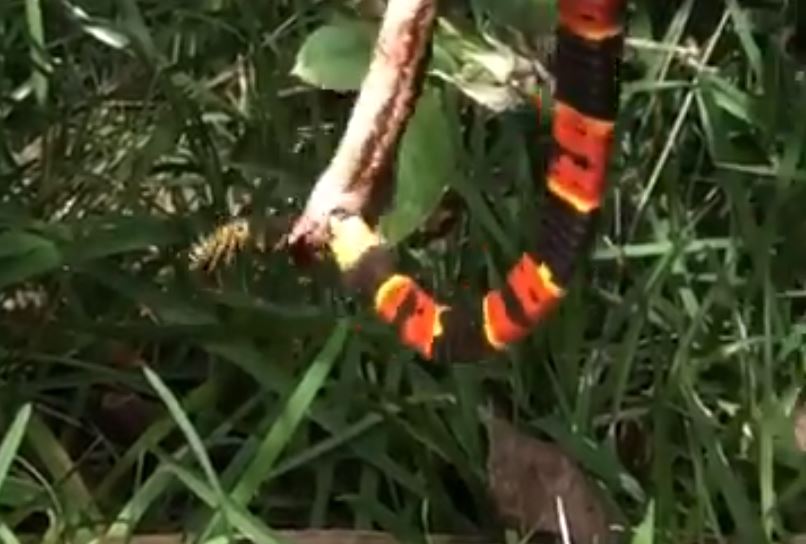 To an outsider, Florida might seem like a lovely place. There’s a seemingly endless number of lovely beaches and near-tropical weather for a good chunk of the year, not to mention all the great parks and attractions to take in. That’s the Florida that they want you to see. The reality is a lot closer to this disturbing clip that is making the rounds on Twitter.

The video, posted by one Evangeline Cummings, is gruesome and strange and pretty much perfect. It shows a coral snake doing its best to feast on a fellow reptile while the two hang perilously from a branch. Oh, and a wasp is also attacking the snake, because Florida.

Click play, but only if you can handle a bit of blood.

Um ok, ⁦@UFEntomology⁩ and ⁦⁦@MartaWayneUF⁩ , I believe I just witnessed a BEE 🐝 stinging a CORAL SNAKE 🐍 while the CORAL was dining on a RAT (?) SNAKE 🐍 and I need your support to process this. ⁦⁦@UF⁩ #FloridaBackyard pic.twitter.com/djbJJGxaUk

The entire scene is bizarre, even by Florida wildlife standards. Coral snakes aren’t exactly known to be climbers, and nobody knows how the other snake (likely a rat snake, according to replies on the Twitter thread) ended up hanging from the branch.

The best guess anyone can come up with is that the rat snake was being carried by a hawk and was then dropped. The coral snake, motivated by an easy meal, decided to stretch its nonexistent legs a bit and venture up the limbs of the bush.

So we’ve now settled on our favorite theory: rat snake was dropped by a hawk or similar and landed in the rosebush. (But the rat snake is somewhat twisted around the branches so I wonder if when I was dropped it was still partially alive and tried to free itself and could not.🤔)

The wasp (or perhaps hornet?) is just doing what wasps and hornets do, which is being a nuisance. You can see how the coral snake reacts once the insect latches on to its head. There’s clearly some pain being dealt there, and the snake isn’t happy about it.

Coral snakes aren’t universally venomous, but the species you see here does pack a venomous bite. As the old saying goes “Red on yellow kills a fellow,” and while humans should steer clear of them, this wasp couldn’t possibly care less.

As freaky of a scene as this is, you can’t help but wish the video was a bit longer. Did the coral snake finish its meal or was it driven away by the wasp? Did the hawk (if it exists) come back for the meal it fumbled? Did the rat snake come back to life and move to a new state? We’ll never know.