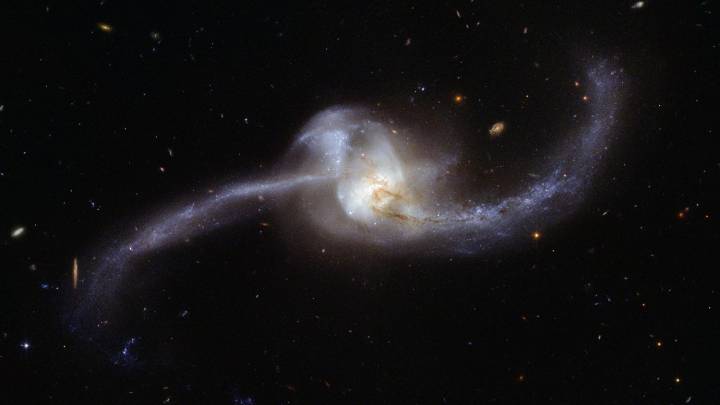 Any time you hear a scientists talk about the origins of the universe it always begins the same way. “It all started with the big bang,” they say, and from there humanity has built a rough timeline of the events that led us to today. But what about before the big bang? You rarely hear physicists attempt to explain it, but renowned thinker Stephen Hawking believes he has the answer. As you might imagine, it’s not the easiest thing to grasp.

Talking with Neil deGrasse Tyson on his popular Star Talk radio program, Hawking dives into the nitty gritty of what existed before the big bang. As Hawking puts it, the answer is “nothing.” Of course, it’s a bit deeper than that, so put on your thinking caps because we’re about to get weird.

“According to Einstein’s General Theory of Relativity, space and time together form a space-time continuum which is not flat, but curved by the matter and energy in it,” Hawking explains. “In the Euclidean approach, the history of the universe in imaginary time is a four-dimensional curved surface like the surface of the Earth, but with two more dimensions.”

Um, okay, so now we’re thinking in six dimensions. To better explain exactly what he means in a way that us mere mortals can actually understand, Hawking likens the space-time continuum to a sphere. The surface of a sphere has no beginning and end, it just exists.

“One can regard imaginary and real time as beginning at the South Pole, which is a smooth point of space-time where the normal laws of physics hold,” Hawking says. “There is nothing south of the South Pole, so there was nothing around before the big bang.”

The idea here, if I’m understanding correctly, is that the universe didn’t exist, and then it did, and now it does. Attempting to actually grasp this idea is no easy feat, and it’s possible (even likely) that humans simply can’t fully understand the concepts needed to explain how the universe originated. But hey, we’re here, and so is the universe, so that’s a plus. That’s pretty neat!