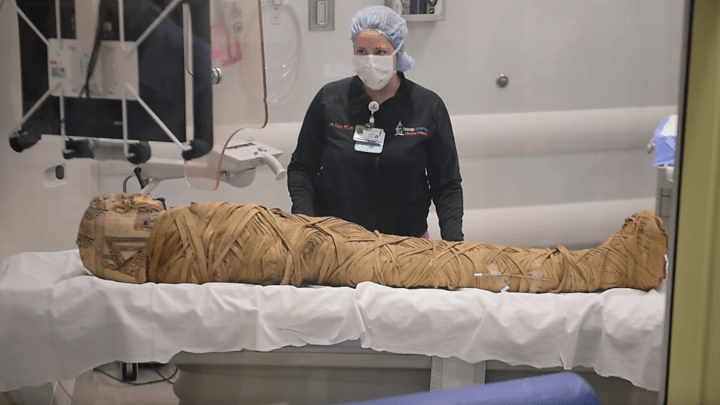 Modern medicine can be a truly amazing thing, extending and in sometimes outright saving the lives of people who would otherwise meet untimely ends. For one man who lived some 2,000 years ago, doctors arrived many centuries too late, but his remains have gotten plenty of attention from medical experts anyway.

The man’s body, long mummified and found in an Egyptian tomb, was recently given a full CT scan at Crouse Hospital in Syracuse, New York, in the hopes of shining some light on how the individual died. Remarkably, doctors were actually able to diagnose the long-dead man — who has been nicknamed “Hen” — and explain the circumstances of his demise. As it turns out, he fell victim to an ailment that still plagues us today: cancer.

“He had a tumor on his Fibula which is one of the two bones of the lower leg,” Dr. Mark Levinsohn of Crouse Hospital explains. “Looking at it, it had all the characteristics of a malignant tumor and one that’s somewhat rare. So, here we have a rare circumstance and a rare tumor and that evoked our interest a lot.”

It’s impossible to know how Hen’s life played out, including whether or not the tumor claimed him outright or if he fell ill and made the decision himself, or even died during an attempted operation. The ancient Egyptians would not likely have had any idea of the man’s fatal disease, much less the technology to adequately treat him, but evidence of crude surgery attempts has been documented by archeologists working in Egypt before.

This is actually the second time the Hen mummy has been examined by physicians, with the previous attempt in 2006 resulting in a muddy diagnosis. “Since that time, the last ten years, they’ve upgraded the equipment,” Dr. Levinsohn notes. “What, at that time was a 16 detector scanner is now a 320 detector scanner and all that additional information is now derived when we scan the body. So, we can tell all kinds of greater detail.”

In a spot of good news, the scanning and diagnosis was donated by the hospital, so at least the 2,000-year-old Hen doesn’t have to worry about being stuck with the bill in the afterlife.