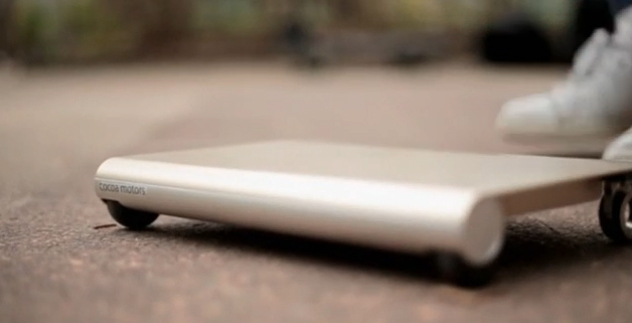 Earlier this week, Lexus proved that it can make a real hoverboard, but it comes with a major catch: We don’t have the streets that can actually make magnetic levitation possible. But even if Lexus’s hoverboards could be used everywhere, there’s now a sleeker, smaller device called the WalkCar that can drive you to work and then hide in your backpack while you charge it near your desk.

Created by Japanese company Cocoa Motors, the WalkCar is a skateboard-like device that has Segway-like powers. The device can carry an individual of up to 265 pounds (120kg) at up to 6.2mp/h (10km/h), for distances of up to 7.4 miles (12km).

“I thought, ‘what if we could just carry our transportation in our bags, wouldn’t that mean we’d always have our transportation with us to ride on?’ and my friend asked me to make one, since I was doing my masters in engineering specifically on electric car motor control systems,” Cocoa Motors’ Kuniako Saito told Reuters.

The gadget needs just three hours to reach a full charge and will cost around $800 on Kickstarter when it launches in the coming months, Reuters reports. The gadget is expected to ship in spring 2016.

The WalkCar is made of aluminum and weighs between 4.4 pounds and 6.6 pounds – that’s between 2kg and 3kg – depending on whether it’s an indoor or outdoor version.

To start it, the user simply has to stand on it. Stepping off it stops the vehicle. Just like with the Segway, shifting your weight from left to right would change the direction (you can see it in action in the video below).