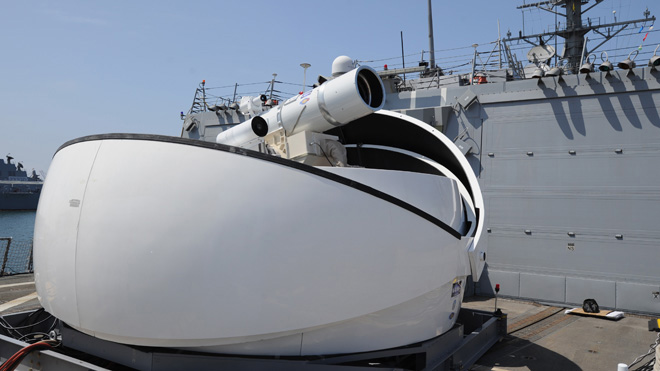 Pentagon officials on Monday announced plans for a ship-mounted laser to debut next year, Fox News reported. A solid-state laser prototype will be mounted on the backside of the USS Ponce in early 2014 for deployment in the Middle East. The cutting-edge technology will be able to obliterate small boats and unmanned aircrafts with a blast of infrared energy. One Navy official described the device as “a blowtorch,” but with “an unlimited magazine.”

Early tests have seen a success rate of 100%, as the weapon has destroyed its target 12 out of every 12 times fired. The laser gun, which is officially known as a “directed energy pulse weapon,” also has non-lethal functions that can be used to warn other vessels. The best part about the technology is that unlike traditional bullets, which can be rather expensive, the laser costs about $1 to operate, although the device itself is worth $32 million.

There are some limitations to the weapon, however.

It is unclear if the laser can take down faster moving objects like a fighter jet or a cruise missile, and also how well the device can operate in poor weather conditions. If the laser gun on the USS Ponce is successful in its mission in the Middle East, it will be painted grey and permanently mounted on top of the ship with other major weapons.

As for what is down the line for American armed forces, Navy officials also confirmed that they are working on a “rail gun” that uses an electromagnetic current to accelerate a non-explosive bullet at a rate that is said to be several times faster than the speed of sound. This technology isn’t slated to arrive until possibly 2025, though.